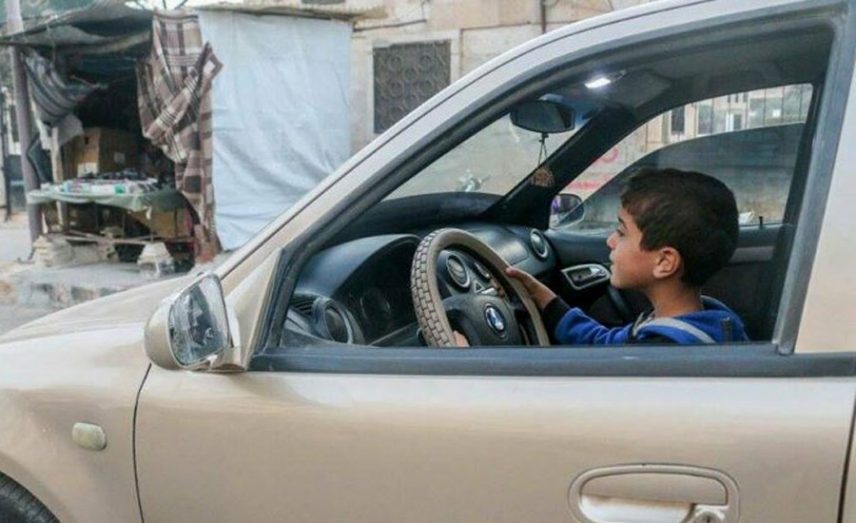 “At first glance from far away I thought that the car was driving itself,” said Umm Mustafa, “but when I got closer, a small head appeared behind the wheel — I was surprised when I got closer that a child whose feet could barely touch the wheel was driving.” The woman, who lives in the town of Maarat al-Nouman, was speaking to Souriatna about her discontent with children driving vehicles in liberated areas, where it has become common to find a child no more than 13 years old driving a car. Some even drive water tanks and small trucks.

There are many reasons which have pushed children to drive vehicles, perhaps the most prominent of which is the loss of their families' breadwinners, or the family’s need for addition income. But some parents are less concerned about the phenomenon, given that Syrians — including children — are living through a time of war, where it is necessary to learn a number of things.

This occurrence has spread in many areas of rebel-held Idleb and its countryside, as most parents are encouraging their children to learn to drive vehicles such as cars, motorcycles or small trucks. Some parents have insisted on teaching their children to drive water tankers, as driving is a skill they could need at any point in the near future.

The spread of children behind the wheel has raised wide discontent among residents and has increased their fears of children’s reckless driving in general, which could lead to serious accidents.

Louay Bakour, a man from Saraqeb, said: “It is very wrong to leave children and adolescents driving vehicles inside villages and towns. The responsibility here does not fall on the children, but on the parents who encourage their children to do this, happy that they have grown up enough to drive a car, unaware that their happiness could turn into tragedy.”

Parents have asked about the role of authorities in limiting the spread of this phenomenon. In response, the head of the information branch in the Idleb Free Police, Maj. Hussein al-Husyan, said: “There is no law or instructions that forbid children and adolescents from driving cars as long as the parents are content for them to be subject to harm. As such, the Free Police have no role currently in these sorts of violations, except in the case of accidents.”

He added: “At which time the role of the Free Police is limited to dealing with the accident, carrying out an investigation, and trying to reconcile the two sides through the intervention of some notables.”

Husyan added that the Free Police have not recorded any accidents from children driving cars, except for one case last year when a 15-year-old caused a traffic accident in the countryside of Idleb.

Faysal Ahmed, a member of the local council in Kafr Bateekh in the countryside of Idleb believes that, “There is no problem in children driving, and in the event of an accident the parents are responsible for the result of their actions.”

He added: “The parents should confirm the ability of their children to drive and give them the car in the daytime and within the district or town.”