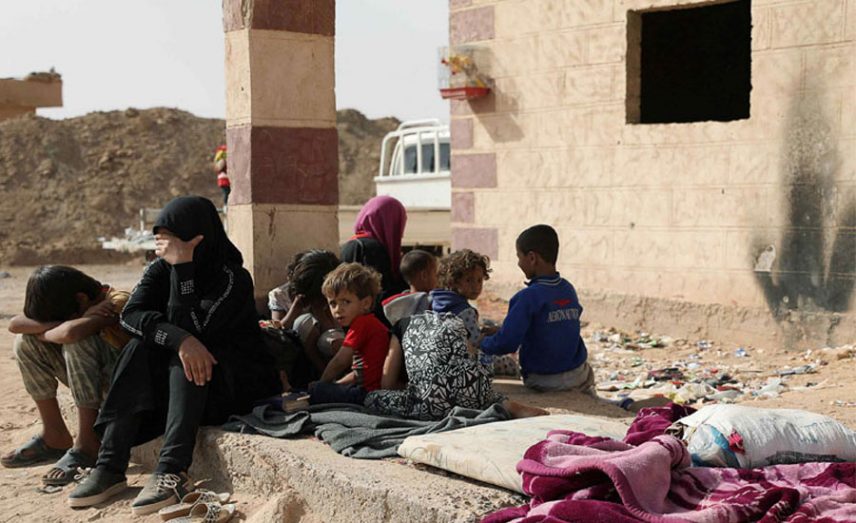 Abou Ali obtained special permission from the Assad regime to enter his district in Al-Jabaliya. He recalled the moment of his departure in September 2012 when President Bashar al-Assad’s forces stormed the city’s districts and clashed with the Free Syrian Army, causing thousands to flee. With about 70,000 people remaining, most of whom want to leave their city, there is almost nothing left but piles of rubble.

According to Enab Baladi’s sources, Assad’s forces had prepared buses to transport travelers from among Deir-ez-Zor’s residents in Damascus who wish to visit their city in exchange for 5,000 Syrian pounds, after the regime took full control of the city on Nov. 3.

Piles of cement and trash now lie in the place of Abou Ali’s home, and although he was forbidden from photographing the area, he estimated more than 50 percent had been destroyed. This was also confirmed by other residents who were allowed to enter the districts that were under the control of the Islamic State (ISIS) group.

Memories of his childhood four decades earlier returned to Abou Ali when he walked in the streets of the Al-Sheikh Yassin, Al-Hamidiya, Al-Howiqa, Al-Aradi, Kanamat and Al-Jabiliya districts. He says that he searched his city for remaining people or stone, and “I did not find anything there, as everything has changed and not returned, even the grave of my father and relatives I was unable to find.”

Umm Mohamad, 72, was displaced from the Al-Aradi district to the Al-Qasour district in the city five years ago. She told Enab Baladi that her house was completely destroyed, saying that Assad’s forces and militias “exploited what was happening to loot what remained in the city without care for anyone.”

“Even the phone lines were not left,” adds Umm Mohamad, nothing that “the latest thefts were of electric cables and the cellular network.”

Many residents feel nostalgia for their city, but they doubt the possibility of returning to it, including activist Masaoud al-Khalaf, 28, who lives in the Turkish city of Urfa.

“There is no way to return as the way is far and there are many checkpoints,” Masaoud told Enab Baladi, noting that the people of the city who have been displaced are following the news and images on social media and television stations.

Those who today walk in the streets of Deir-ez-Zor are aware that the city is living without facilities or services and needs years of reconstruction to restore life again. Meanwhile, the one certainty which most residents agree upon, despite their allegiances, is that the city has changed and will not return to the way it was.