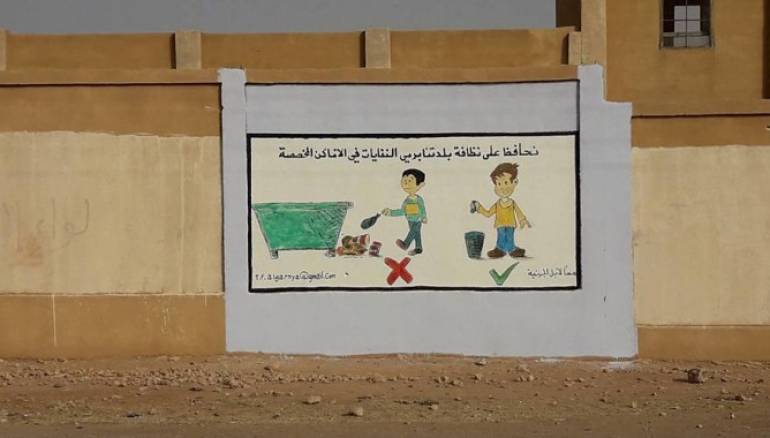 Local initiatives and civil society associations in Raqqa are working on removing earth mounds, trenches and the effects of war from the streets of the western towns and villages of the province, while agricultural land is still waiting for similar projects to start for owners to cultivate and reinvest.

Head of the “Together for Our Town to be More Beautiful” campaign, Bashar al-Khalaf, said that project workers have completed the transfer of 1,850 cubic meters of garbage, the leveling and filling of thousands of meters of mounds and trenches in the towns and villages within one month.

In a statement to Iqtissad, Khalaf added that the team worked to provide the villages with garbage containers and drew murals on the walls of schools and buildings in order to make people aware of the importance of cleanliness.

The project manager explained that a tractor and a number of workers were deployed in every division, along with a bulldozer working two days a week.

According to the Khalaf, the project will take around four months to complete and will finish in the second half of January, 2018.

The most important part of the project will focus on the area of Jurnia west of Raqqa, which was taken from the Islamic State (ISIS) at the end of 2016.

Local residents have expressed their satisfaction with the projects in the targeted villages in the western countryside, calling for expanding the project to include some of the neighboring and damaged villages which witnessed fighting between ISIS and Syrian Democratic Forces (SDF) militias a few months ago.

Alongside the scattered mines, the abundance of berms and trenches which lie along the province’s agricultural land remain a major obstacle to the work of farmers in re-cultivating their lands. Residents are hoping for these areas to be included in such projects.

In October, the SDF backed by the international coalition forces took control of the entire city of Raqqa after about four months of fighting with ISIS.