Thousands of displaced brave harsh weather and a lack of aid in a stretch of no-man's-land between Syria and Jordan, Zaman al-Wasl writes 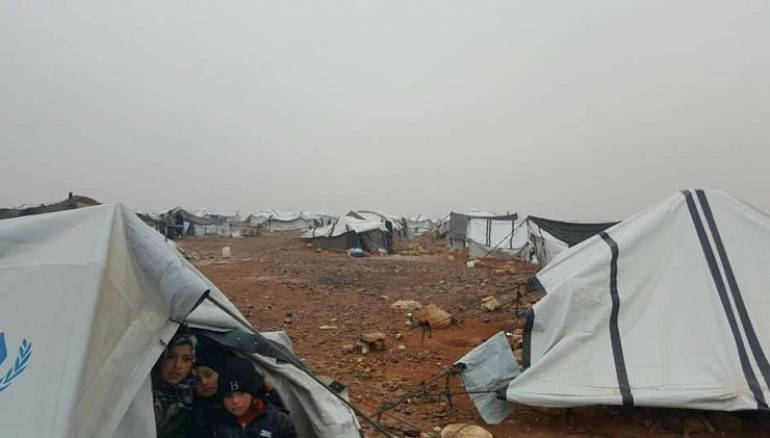 In the dead of winter, Syrian refugees are forced live through dire humanitarian conditions in the Rukban Camp on Jordan’s border, amid neglect and a lack of support from international relief organizations.

Abdul Kareem Abdullah of the Badiya Now webpage told Zaman al-Wasl that the suffering of refugees has mounted due to the shortage of fuel as well as rising prices despite the deteriorating economic situation for families inside the camp.

He added that the camp residents currently receive their heating materials either through smuggling or through regime checkpoints surrounding the area, which require vehicles to pay large amounts of money to Rukban Camp.

He pointed out that the recent rainstorm which hit the camp has caused severe damage to tents, while the rain has caused extensive flooding within dwellings. The storm has also resulted in raised prices of fuel, with the cost of a liter increasing to 500 Syrian pounds.

Regarding the medical situation, Abdullah said that the medical points inside the camp suffer from a lack of qualified doctors, medicine and medical equipment, as well as a shortage of milk formula and food for children.

The only aid convoy to enter the camp arrived at the beginning of January, with Jordanian authorities yet to announce plans for further aid distribution.

According to Abdullah, the aid convoy, which included food supplies, detergents, blankets and clothes, barely covered the needs of the residents of the camp, which shelters around 11,200 families.