The marrying of young women to elderly men is pushing many to reflect on the social issues caused by the practice, Enab Baladi writes 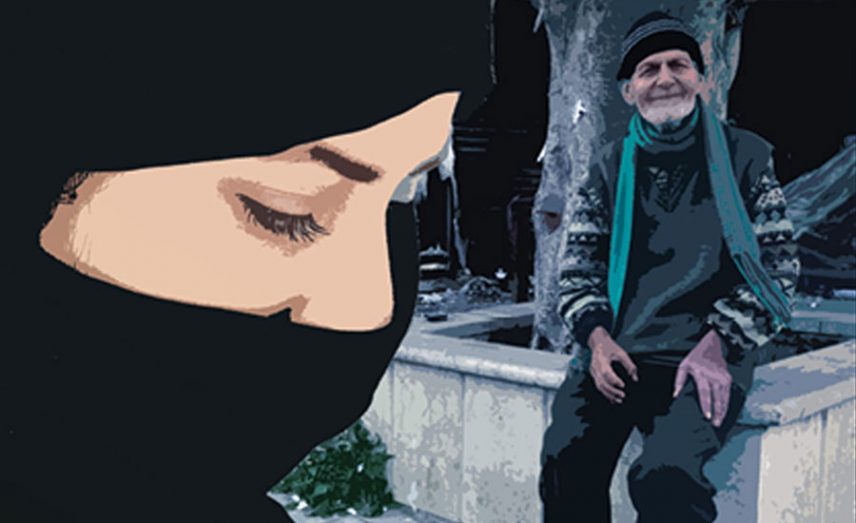 Three years ago and under pressure from her family, 35-year-old “Samia” married a man who was 73 years old, finding herself nursing an old man with diabetes who needed care and support in the last months of his life.

Enab Baladi met Samia in her house in Qamishli, and despite the eagerness she expressed to discuss her suffering and to reveal her true name and face, her mother opposed her daughter sharing her story.

Samia later spoke without revealing her true identity, and elaborated in a long discussion about her suffering which began inside her family home, only to end there at another time.

“‘Spinster, spinster,’ my father and mother and siblings were repeating this over and over, and after my father died, my brother arranged to marry me to an old man.” She did not have a choice, but was forced into this life with her new husband.

Samia says that the man whom she married was decent, but that she couldn’t find a way to create any understanding between them. Perhaps there was not enough time for that, as he fell ill and died after about five months of marriage.

The end of the older man’s life was the beginning of a new stage of Samia’s tragedy. The war further muddied the waters, and poverty and fear were added to her family’s persecution.

The war which afflicted Samia may have created dozens of similar cases. The lawyer Efan Kilish told Enab Baladi that the phenomenon of young women and girls being married off to elderly men sometimes decades their senior has grown in Hassakeh province since the war.

Kilish said that the poverty from which Samia suffers is one of the main reasons for this phenomenon, as youth unemployment, in her view, has led to “some girls preferring elderly men as they are ready financially and prepared to provide a decent life.”

Kilish adds: “During the war, the cases of girls marrying elderly men has increased because of the shortage of young men in the country, as some have died in the war, others have been disabled, and others have fled.”

The lawyer vindicated some residents’ fears in this respect, specifically those related to the waves of internal and external displacement, which have helped see an increase in cases of rape and the harassment of women.

But the phenomenon is not limited to one area in Syria alone. The reasons which have led to its increase have affected Syrians in various regions, creating crises similar in nature with the same results.

In the Eastern Ghouta, three marriages between elderly men and younger women or girls were recorded in a single month, according to the director of the civil registry, Islam al-Dimashqi, who said that most of these cases were men whose wives had died or were displaced to other areas.

Mohamad Khalid, a grandfather from the city of Hamouria, is one of those men who married after the age of 70, and he does not see any embarrassment in explaining his motives for marrying again, which is limited to his need for a women to “take care of him.”

Khalid, who is 75, told Enab Baladi: “My wife died and I was alone for five years. I did not want to marry but I did not want one of my children to care for me, and so I decided to get married to find someone to help me.”

Khalid’s story meets with Samia’s in the idea of “service,” for which the husband is a culprit who can rest at the expense of a victim, governed by the legitimacy of customs, traditions and difficult conditions.

Dimashqi justified Khalid’s marriage and others of elderly people with the “fatigue of solitude and need for stability.” But lawyer Efan Kilish believes that marriages of this type impact women negatively and deprive them of their rights.

Khalid's wife today lives with him “in sweetness and bitterness,” despite the conditions of the siege imposed on the Eastern Ghouta, “serving” him and saving him the trouble of asking help.

But Samia has not been able to obtain any of the inheritance to which she has a legal right, as her husband’s children have banned her from the house which was registered in her name before he died, on the pretext that the process had not been fixed in court. So Samia went back, as she put it, to being “a servant in her brother’s house.”

Syrian society expresses tolerance in issues related to men and puts them in their natural context, permitting for men what is not allowed for the other half of society. These include overlooking “slip-ups” which women might collide with, on the excuse that she is a “woman” and he is a “man.” A woman asking for marriage was — and still is — shameful in Syrian customs, especially as she advances in age, while it is available — indeed, encouraged — among men, even if they have entered the autumn of their lives, as in the saying, “Better to be a bachelor all your life than a widow for a month.”

Despite invitations to marry from widows and women who have passed the age where it is customary to marry, some elderly men have found a chance to meet their desires by marrying girls in their 20s, and here the motives are not in the context of responding to the urgent needs of society regarding women, but are due to the desires of some older men to renew their youth with younger women, through whom they can return to the days of beauty.

Syrian women today have come to accept any husband who can provide financially and with whom she feels protected, even if she would not accept him in a normal situation, thereby avoiding the many implications of the word “spinster,” in addition to ridding herself of hard financial circumstances she endures in her parents’ home.

Older men's motives to marry young women, as Dr. Zahara Bitar sees it, are due to psychological and inherited patriarchal factors, through which the man wants to test his “masculinity” and his ability to have sex like a young man. In addition to this, elderly men are convinced that the wife, if she is young, might return him his youth and have children, as Bitar told Enab Baladi.

She said that the financial conditions of women and their families have paved the way for marriages of older men to younger women who need to marry, as they can provide his sexual, social and life needs.

How do Syrians view marriage to elderly?

There are many reasons which push elderly men to marry women and girls who are many years younger. However, this phenomenon, which has increased in Syria since the war, has stirred social controversy.

Some see it as a solution for women who have delayed marriages, while others see it as a good way to provide “protection to wives of war victims and prisoners.” Others view it positively as it is not prohibited by Sharia.

But a large portion of Syrians reject these marriages and see it as a negative issue bearing many psychological and social consequences for women as well as for children.