Residents and opposition fighters band together to prepare the town for a seemingly inevitable major assault, Majid al-Halabi writes 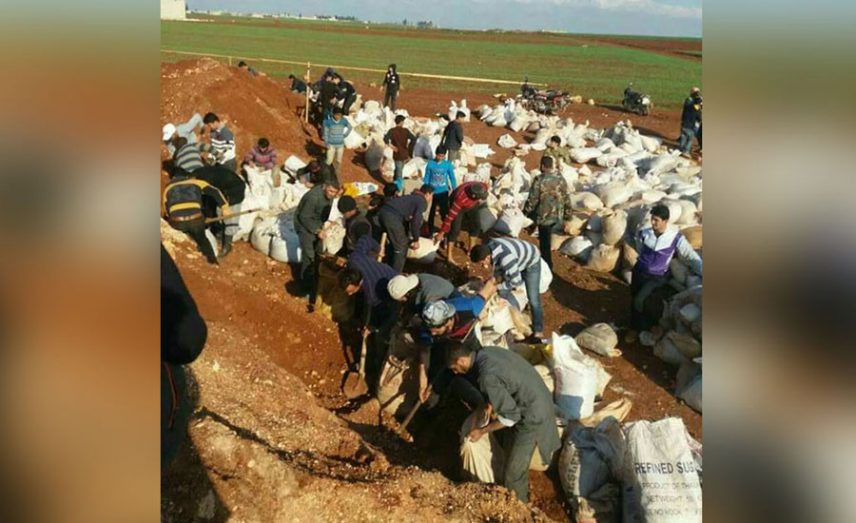 Before thousands of people fled Saraqeb, its residents — the elderly, young people, women and children — carried out their duty toward their city and picked up their shovels — this time not to cultivate the surrounding green plains, but to set up berms as barricades against President Bashar al-Assad’s forces, who were now just kilometers away.

“Saraqeb will not fall except over our bodies” — these are the words which city residents speak and which are heard by the whole world. The images circulating from there bring you back to the first days of the revolution and make you want to say “this citadel will not fall,” as most men of the city are sending their women and children to the secure areas in order to be able to return to their city.

Despite the regime controlling the town of Tel al-Sultan just 13 km from Saraqeb, rebels in the city are determined to defend their homes and have formed a Saraqeb Army, also joined by groups of the Free Idleb Army, the Al-Azza Army, Al-Nasser Army, Faylaq al-Sham, Ahrar al-Sham, the Turkestani Islamic Party and groups from Hay’at Tahrir al-Sham, according to press officer Mohamad al-Awad of the Free Idleb Army.

Residents launched a donations campaign to purchase weapons and ammunition for young men to defend the city. “The trenches are united” — said Abou Mohamad, a displaced person from the city of Atarib, speaking to Ain al-Medina. “What is happening now restores to the revolution what it had lost” as hundreds of young men from the western Aleppo countryside have met with the Saraqeb Army to join its ranks — however the Army has expressed that what it needs at this stage is logistical support and not more fighters.

Samer Qarabi, a member of the Revolutionary General Commission of Aleppo city, said that work was underway to communicate with humanitarian groups to provide logistical support (fuel oil, food, drinking water) to rebels in Saraqeb and to form a media committee to shine light on the crimes carried out in the city, as well as activate revolutionary mobilization in the area to support them in light of the attack.

Despite the utopian scene Saraqeb presents these days, there is a lump in the throats of its residents after the price of fleeing rose to hundreds of dollars. The average price of rent in the city of Idleb has reached $200, with prices higher in Sarmada and Al-Dana.

Saraqeb will resist without a doubt and, whether or not Assad’s forces are able to occupy it, will be victorious because it has revived the spirit of a revolution that had almost disappeared.