Despite international pledges of assistance, much work remains to clear the city of the dangers that ISIS left behind, Enab Baladi writes 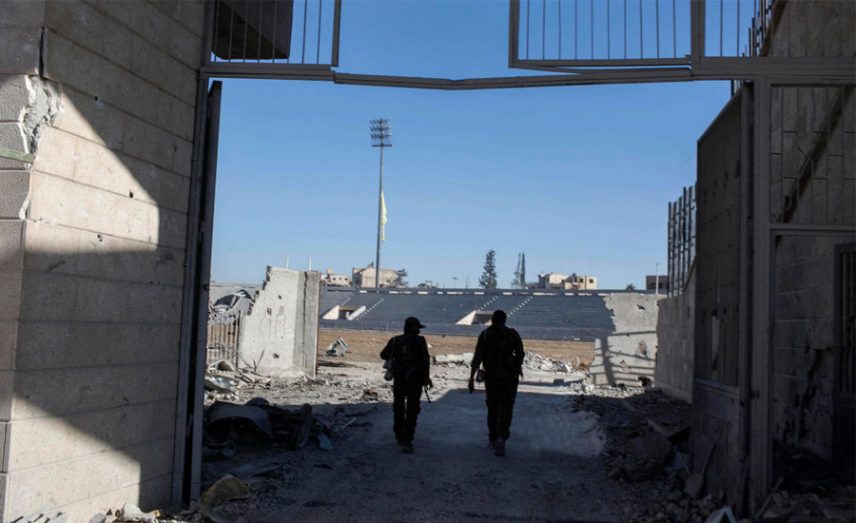 From a city of poetry and love to the “capital of the Islamic caliphate,” and then a field for strengthening national symbols far from the identity of the city, the situation of the city of Raqqa over the last four years has changed with the colors of the banners raised above it. With the loss of thousands of its residents and more than two thirds of its infrastructure, it has become hard to identify the outlines of the original city.

Perhaps the stage of the Islamic State (ISIS) group’s control over Raqqa from 2014 to 2017 was the harshest in the city’s history. After declaring Raqqa its capital, the city it became the favored destination for extremists around the world — and thus a target for the dozens of countries who wanted to fight the “terrorists” gathered in one of Syria’s smallest cities.

Today, with the group gone and the city’s banner changed from back to yellow, Raqqa is still a stage for some to settle international accounts, and its residents are still paying a bigger bill, as victims of the remaining landmines of ISIS, and as a United States bargaining chip in the hands of the fighters of the Syrian Democratic Forces.

After about four months of SDF control over Raqqa, the shape of the city has not changed much from the moment ISIS departed, as the ruins of buildings have not left their place and the city center has not recovered any of its former life.

Ahmed al-Mahmoud, a journalist from Raqqa, says the number of civilians who have returned to the city is no more than 10 percent of its total original residents.

This number may appear decent if we compare it with the “sluggish” progress of removing rubble, repairing partially damaged buildings and clearing mines.

According to Mahmoud, most of the residents have settled in districts such as Al-Mashlab, Al-Rumaila and Al-Furat, where the destruction is not more than 30 percent, as compared with up to 90 percent in the city center. Mahmoud says that the mine clearing in these districts is proceeding quicker than in other areas.

The Al-Kasarat area west of the city has also seen a relative revival, as it was spared major damage when ISIS withdrew from it without a fight. Al-Kasarat is an agricultural area with water available, allowing for increased trade in vegetables and fruits.

Meanwhile, central Raqqa is a “ghost town,” according to Mahmoud, who said that activity picks up partially during the day while residents head to the outskirts at evening.

Mahmoud added that there are many stores which have opened their doors, with the media making it look like they are active and full of color. But he says they are actually empty and surrounded by destruction. He said that this comes in the context of the promotion efforts that the SDF is carrying out to show that life has returned to Raqqa.

However, those who have returned to these districts are those who have been forced to do so, according to Mahmoud, and most have previously been displaced to camps on Raqqa’s outskirts and prefer to return to their partially damaged homes, despite the deterioration of services, a lack of water and the difficulty of obtaining electricity.

The United Nations has expressed its fear about the deteriorating humanitarian situation in Raqqa after ISIS' departure, with Stephane Dujarric, spokesman for the U.N. secretary-general, saying in December that the residents who were in the city suffered from a lack of water, medicine and other aid.

He added that employees of aid agencies had not been able to access the city while warning about the spread of diseases as some bodies of those killed by explosives had not been buried.

The Raqqa Civil Council, which was established by the SDF in March 2017, is working to clear the city of rubble and to remove detritus of war in cooperation with a number of international organizations.

The community-driven “Early Intervention Team” was established at the start of June 2017 and works to find solutions for residents’ problems by monitoring their suffering in the context of restoring stability to Raqqa.

The team is formed of two divisions, one focusing on periodic meetings with residents to monitor their needs, and another composed of an engineering team that studies possible solutions for these needs and works to implement them on the ground with the help of regional administrators.

With the conclusion of the war against ISIS, many questions have begun to be posed about the coming reconstruction and its source of funding and resources.

The international coalition, led by Washington, expressed its readiness to participate in reconstruction, however the regional spokesman for the American State Department, Nathan Tek, said at the end of last year that a difficult task remains in restoring stability and rebuilding the city, adding that the reconstruction of Raqqa will be “long term.”

After the American statements, many international promises have been made toward reconstruction. But most have been limited to funds for clearing rubble and mines, and reducing environmental risks resulting from the clearing of hundreds of corpses still under the rubble. French Foreign Minister Jean-Yves Le Drian said that his country had allocated 15 million euros at the end of last year to carry out the mine-clearing projects, as well as for food, water, health and assisting refugees.

The Civil Council also discussed efforts for “reconstruction with international support” and efforts to mobilize funding from Arab countries, the United Arab Emirates, Saudi Arabia and European countries to clear rubble and secure the city.

However, these promises, which have not translated into anything on the ground yet, can be read in the context of political messages and attempts to pressure Turkey and Russia.

U.N. numbers indicate that remaining mines in Raqqa kill 50 to 70 people per week. The organization has described the numbers as shocking, and has warned of a greater danger to the returning residents, who number 450,000.

In a press conference, the regional humanitarian coordinator for the Syrian crisis, Panos Moumtzis, said earlier this month: “The number of unexploded ordnance in Raqqa is something that we have never seen before. Extreme. Every house, every room, every inch of the city.”

He said that the organization could not prevent citizens from returning, but that they need to be careful of war remnants.

Since the SDF took control of Raqqa in mid-October, activists have recorded daily deaths of civilians from mines left behind by ISIS.

The SDF has called on all countries and humanitarian and international organizations to “contribute to the reconstruction of the city and its countryside and to help clear war remnants and the destruction caused by the Islamic State group.”

Local civil teams which work on clearing mines have deployed in response to the call, but have usually avoided making media statements given the sensitivity of the issue.