Residents of the eastern city are returning to streets covered in rubble and a catastrophic level of destruction, Salon Syria reports 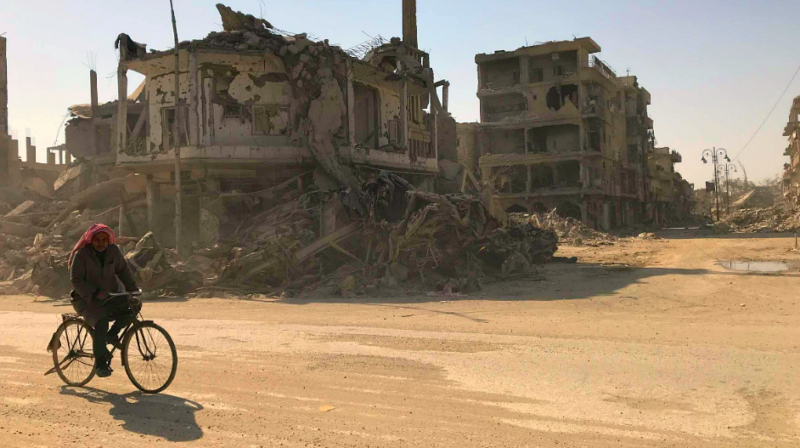 “Entering the city of Raqqa resembles a moment of death, a moment of tragedy starting out large and then fading away.” This is how Dr. Fawaz al-Ahmed, who returned to Raqqa about four months after the Syrian Democratic Forces took control, described his city.

“Everything I had seen on TV stations about Raqqa city was nothing but a small part of a kilometers-long picture of destruction and rubble, and districts emptied of residents where the smell of decomposing bodies emerges – the smell of death and destruction," Ahmed said.

A children’s doctor who had not left Raqqa for 20 years, until ISIS took control of it at the start of 2014, Ahmed spoke about his inability to sleep when he returned to the city, saying: “I couldn’t sleep the first night. The first morning I walked in the streets of the destroyed city and I was grieving and in tears. On the next day, I controlled myself and didn’t cry. I walked in all its streets. On the third day I started to look for workers to restore my house and my clinic so that I could stay in my city to offer services to its residents, who were deprived of them during ISIS’ presence and after.”

ISIS turned Raqqa into its capital, leading to the city’s destruction and some 70 percent of it turned into rubble. There has been no serious effort to mobilize to reconstruct the city, despite repeated promises in conferences which have remained ink on paper and have been limited to clearing rubble from three streets in a city which extends for thousands of hectares, carried out by the American Early Intervention Organization.

Despite the major destruction which has transformed many of the city’s districts to rubble, some residents have returned to their neighborhoods and have restored what they can of their destroyed homes, amid an absence of basic services. The return has been a shock to the entities supervising the city, some of whom gambled that no one would return to the city.

The Raqqa Civil Council – established by the SDF – supervises the rubble-clearing operations. The council’s secretary-general, Ibrahim al-Faraj, estimates the volume of destruction in the city center and the western districts at about 80 percent.

“The weight of rubble in the streets is about 10 million tons. In cooperation with the Early Intervention Organization we are clearing out rubble and opening the main streets to ensure roads are opened, mines cleared and the safety of the residents – who are estimated to number 180,000 people – is guaranteed,” he said.

He added: “Although the city still lacks even the most basic services, the life in the camps is forcing them to return to their city.”

Faraj said that many difficulties face the return of the residents, "But we are trying to secure services for them. We are securing electricity through the Al-Farousiyeh station and generators for the districts where residents have returned, in addition to opening a medical center in cooperation with the Doctors Without Borders group.”

The main district that has seen a major return of the city’s residents is the Mashlab neighborhood, in the city’s east. It was one of the first districts which the SDF took control of at the beginning of June. Most of its residents have returned alongside some residents of other districts, and life has returned to the district quickly through the movement of reconstruction and renovations of houses that were destroyed by bombardment and battles.

Salah al-Hassan, a resident of Mashlab who returned after the SDF took control of the city, said that “since the end of October, the SDF prevented entry to the district for about three months after they took control, and shot at residents of the district and wounded a number of them, aiming to prevent residents from returning until they had finished looting the homes. However, with people’s insistence they allowed them to return to some homes after they had been subjected to destruction and theft, while other homes were subjected to minor damage.”

Hassan, who works as a trader, said everyone had bet that the residents would not return to the city, because of the heavy destruction which had been inflicted to it. But he said that “people had come together to overcome the difficulties which had prevented many from returning by offering home furnishing. We are part of a tribal society and we need to help one another in difficult circumstances.”

“Returning to a destroyed house is much easier than living in a tent out in the open,” he said.

Hassan added: “With the increasing number of residents in the district, the services remain limited, especially drinking water, which is mostly polluted. There have been attempts to sterilize it, but all of this is being doing gradually.”

He said that “the destroyed districts were looted by some SDF fighters, who advanced into the city before residents returned and looted the city’s homes in broad daylight.”