Many children are out of education, as schools suffer bombings or are used as places to shelter the displaced, Sada al-Sham reports 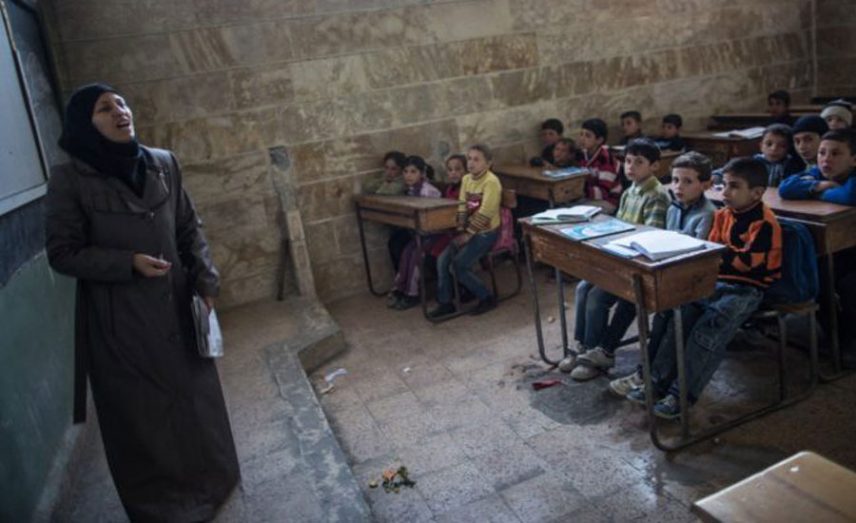 The education sector in Idleb has recently seen a frightening decline, pushing the education directorate to sound the alarm after it was announced that thousands of displaced students had dropped out in the eastern Idleb countryside, and that an additional number of schools have gone out of service due to air bombardment and displaced people taking refuge in them.

What may also be making the situation worse is that some schools active in the province have stopped work because salaries for teaching staff have been cut off for several months, as some international organizations have stopped giving support to the Idleb education directorate, which is under the authority of the Interim Government, because of what is said to be interventions from the rival (extremist-linked) Salvation Government.

This situation coincides with a number of academics in the province warning about the danger of the decline of the education sector, whether for young children displaced to new areas and who have not found a school prepared to take them, or even for older students who are now threatened with losing their right to pursue their education with the increasing closure of middle and qualifying schools because of the end of material support.

A few days ago, the Idleb directorate said that more than 150,000 students from the eastern countryside had recently stopped their education because of the conditions of displacements and military operations which have affected their areas, while 30 schools have gone out of service in Idleb because of bombing.

Regarding the reasons which led to the collapse of education in Idleb, Samer Younes, a math teacher in the city of Ariha, said that a number of teachers had stopped going to school and carrying out their work because their salaries had been cut off for more than two months. Younes told Sada al-Sham that some of the organizations that had been supporting education in Idleb had stopped support for the Interim Government entirely, which led to a strike of more than 2,800 teachers working in various education sectors.

Younes said that “some teachers are still working voluntarily, but the situation continuing as it currently is will negatively impact all aspects of education, because the teacher has living responsibilities that must be secured.”

The website of the Education Support Team, which monitors education issues for Syrians in liberated areas and neighboring countries, published what it said was a document it obtained from Chemonics, one of the most prominent backers of the education directorate in Idleb, concerning news of the group's total halt of all forms of support for the province.

According to the document, the organization had informed the Education Ministry of its intention to suspend support and salaries for about 10,000 education staff in the province beginning from the end of January, and to suspend its partnership because it said risks had “increased in the province after the appearance of the Salvation Government and its attempts to intervene in educational decisions and dominate them.”

The areas of the northern Idleb countryside are the most affected currently because of the recent arrival of thousands of displaced people, with some of them forced to live in schools until alternative housing can be secured for them.

Faced with that, a number of local charities have worked to open free schools for students in Marat al-Numan, Al-Ghadfa, Qah, Marat Masrein and Idleb city, while other civil institutions have secured the necessities of some primary schools in the Idleb countryside in terms of salaries and heating fuel, while the rate of schools guaranteed is no more than 10 percent of the province’s schools.

Faced with this reality, temporary solutions have recently emerged in which some volunteers in mosques have contributed, trying to remedy the issue of educating young people in reading and writing by opening sessions and schools in mosques to educate the young.

Munzer Asyan, who lives in the village of Sfuhen in the Idleb countryside, said residents have begun to resort to this option to educate small children because of the lack of schools in their villages and the many that have gone out of service.