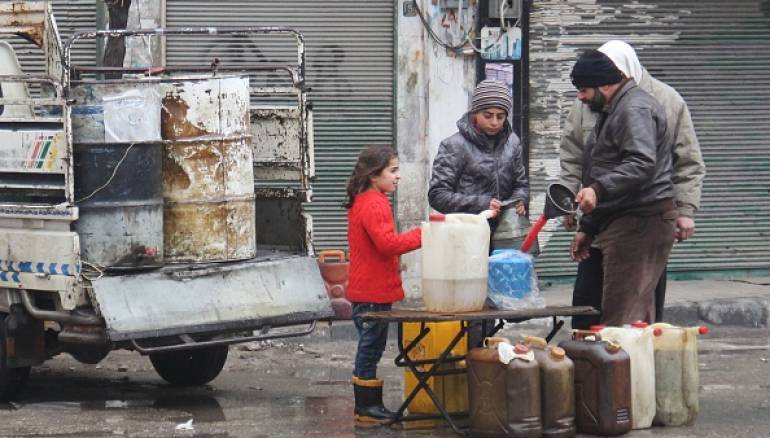 Residents of northwestern Syria have been suffering high fuel prices following the closure of a supply route between the towns of Azaz and Afrin, as Turkish forces backed by the Free Syrian Army launch a major attack to seize the Afrin region at the border.

As Operation Olive Branch enters the second month, fuel stocks have almost run out in Idleb province and parts of the Aleppo countryside amid a hike in prices.

A barrel of diesel costs $300, a huge increase on the price two months ago.

Despite the entry of the fuel oil from Turkey through the border crossing of Bab al-Hawa, the crisis has not been resolved.

An oil trader in Turkey told Zaman al-Wasl that he had requested to supply large quantities of fuel and even domestic gas to the Idleb countryside through Bab al-Hawa.

The soar of prices has also hit the bakeries, forcing a number of them to close due to lack of fuel. Meanwhile, some emergency and health centers have been closed, warning of a humanitarian disaster in the region.

Idleb has been a haven for tens of thousands of rebels and civilians who were forced to abandon their homes in other parts of western Syria that the regime and its foreign military allies recaptured.

It has already been the target of intensive strikes by the Russia and regime air forces over the past year that have killed thousands of civilians and destroyed hospitals and Civil Defense centers.

The United Nations relief agencies said bbout 5.6 million Syria people in 1,244 communities are in "acute need," including 2.9 million in hard-to-reach and besieged locations.