Enab Baladi explores the desperate situation of civilians in the embattled enclave, who are caught between fractured rebel groups and the world's apathy 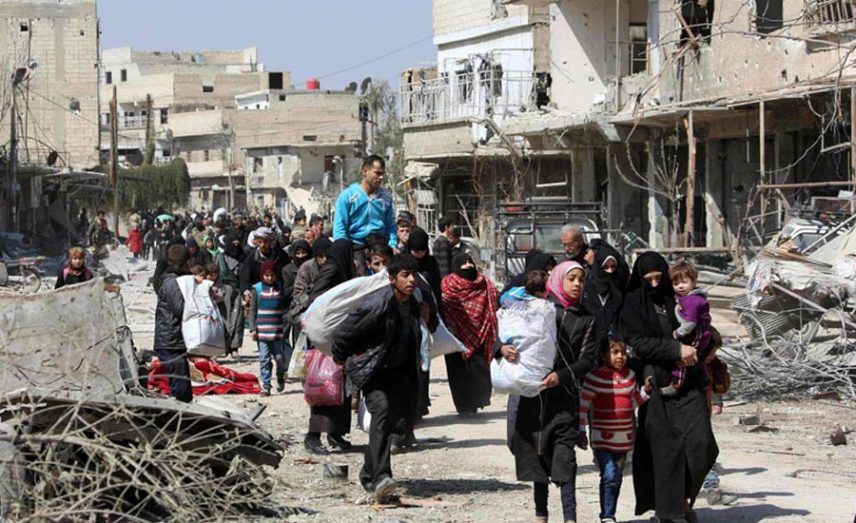 The scene of displacement from the Eastern Ghouta can be summarized as one of abandonment of civilians, from the international community on one hand and from the mix of factions which have led the area for the last five years on the other.

The video recordings showing the moment of them leaving their towns and cities are harder than the images of the casualties and wounded who have been struck over the months of the Assad forces' military operations.

Russia may have succeeded in imposing the Aleppo scenario on the Ghouta, but the issue is more than that and has progressed into conditions of displacement that no city has endured over the years of the Syrian revolution, as civilians have been forced out by foot toward regime-controlled areas after the rebel groups collapsed and retreated unexpectedly with the heavy Assad campaign's advance in the central sector.

The town of Hamouria topped the scene of displacement, as it was the first area from which thousands of civilians passed through crossings opened by the Syrian regime.

This came after heavy bombardment upon it with a variety of weapons, accompanied by a ground assault by Assad’s forces through which they managed to enter deep into the town and the surrounding areas after the Faylaq al-Rahman group withdrew.

A week after the start of the military operation, Assad’s forces and militias backing them were able to divide the Eastern Ghouta into three pockets: Douma, which was controlled by Jaish al-Islam; the central sector, under Faylaq al-Rahman’s control; and Harasta, which was under the Ahrar al-Sham group’s control.

But this was not new for the region, as the internal conflicts between the military groups had previously nourished the idea of division. Checkpoints had been set up between the groups’ regions, which had a major role in drawing the borders between one group from the other and bolstered the split between the Ghouta’s internal community, which was tied to the military division.

The matter did not stop there, but extended into the area’s media, with each group establishing media speaking in its name and in the name of the areas which it controlled.

This went as far as Faylaq al-Rahman’s last circulation which forbade military news and news from the field except under their instructions. This frightened civilians, as a number of fronts had seen withdrawals without media coverage except from the Syrian regime.

The fronts witnessed a major retreat, and in less than a month the rebel groups lost 70 percent of the territory they had previously controlled.

Meanwhile, the international community failed to reach a solution to halt the fighting and the Assad forces’ advances. The statements from regional countries were blank cartridges compared with Russian intransigence around the continuation of the military operations and forcing of rebel groups to sit at the table to decide their future in the region.

All of this has been a major factor in turning civilians to a state of despair, according to Enab Baladi’s correspondent, who said that residents have been driven to increase pressure on the fragmented rebel groups, in an effort to reach a solution and avoid their fate being decided militarily.