Damascus' Justice Department deals with cases of babies whose families are unknown almost once every two months, Al-Watan reports 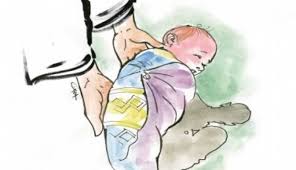 A judicial source said that the number of babies of unknown descent registered during the crisis is about 300, revealing that Damascus' Justice Department receives a case almost once every two months

Talking to Al-Watan, the source confirmed that these cases are a small issue compared to the crisis experienced by the country, pointing out that Syrian society is still in good shape despite the increase in many social issues, such as those surrounding divorce and marriage, seen in social and other media.

The source explained that the child is medically examined and then registered in the civil registry, where a registry employee chooses the name, parents and descent. They confirm that the child enjoys all its civil rights.

The source pointed out that these cases remain completely secret unless parents became known or the truth is ordered to be revealed by a judicial request.

The source also said that whoever found such a child in the first place has the right to apply to the Ministry of Social Affairs and Labor for a fostering request, to take charge of the child's upbringing and take care of them. The ministry signs a fostering contract with the guardian that must be renewed annually. [Adoption is forbidden in Islam – The Syrian Observer.]