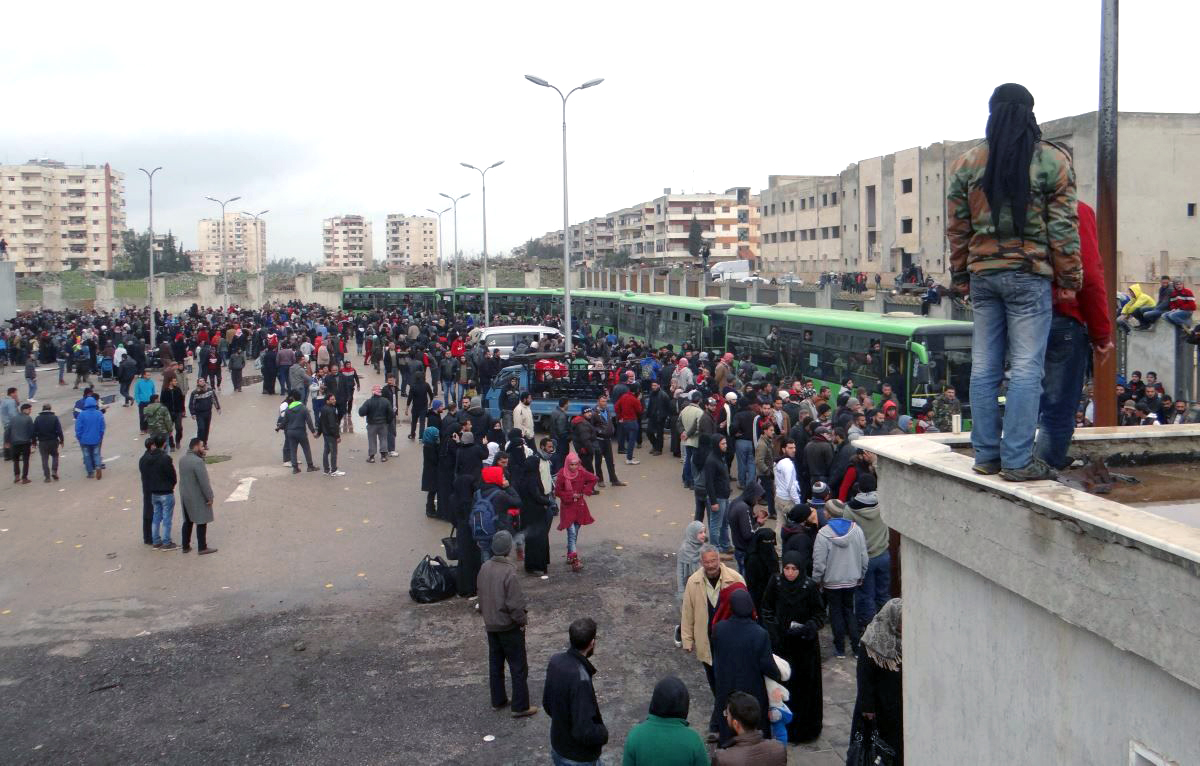 Tens of thousands of Syrians displaced from their cities and towns in Idleb province have faced many difficulties in setting up a new life after they were deprived of their homes and the cities, in light of the policy of displacement carried out by regime forces, with Russian backing, across Syrian territory that had previously fallen out of its control.

When you walk in the markets of Idleb city, you hear vegetable sellers calling out in Damascus accents, while another seller calls out in heavy Aleppine, as well as other accents. All of them can be heard in a small street which has the characteristic of every Syrian city.

Idleb province, which was the first destination for displaced from Aleppo, hosts more than 600,000 people, including province residents and displaced from various Syrian cities who found themselves in a new place and have been forced to acclimatize in a city they did not choose to begin their lives again.

“I did not for a day believe that I would continue my life outside my city,” says Mona Sabbagh, 25, a mother in a Aleppine family composed of five individuals, including three children, who left during the deal to expel residents of the eastern districts of Aleppo at the end of 2016.

Sabbagh spoke about her experience with forced displacement during her interview with Al-Hal and said: “We left, my husband and I, forced out with our children from Aleppo city. We came to Idleb city leaving our house behind us, major portions of which had been destroyed by regime bombardment. We did not choose this city, but we were forced to do this. We are now living in a big prison. We have been deprived of finishing our university studies, and we are wanted by most of the security forces because of our participation in the peaceful demonstrations at Aleppo University when we were students there.”

Regarding the new life in Idleb, Sabbagh said that she had been treated well by the city’s residents, in addition to the “acceptable” interest from humanitarian associations and organizations for displaced.

He says that the difficulties which displaced people confront lie in finding work opportunities, which there are few of, in addition to the major increase in prices of rent, which have risen many times because of the major overcrowding of cities and towns of northern Syria.

Malak al-Zeir, administrative director of the Violet Organization, said that thousands of displaced people had begun to actively settle and establish new lives in the cities in which they live and said “displaced people have quickly integrated into society and there are many factors assisting in this, most importantly the unity of language, religion and a common enemy, which distinguishes the situation from those of refugees who have been forced to live in completely different countries. The biggest difficulties which impede the stability of displaced people may be the lack of an entity to serve as a central government concerned with their affairs.”

Regarding the efforts carried out by organizations for displaced people, the administrative director said that Violet had established an emergency team with major capabilities whose mission was to follow up on displaced people wherever they moved.

He added: “There are a number of projects launched by organizations to rent dozens of houses in cooperation with local councils. The need in the north is very big and above the capacity of the NGOs. There are also dozens of schools which have been opened recently, the response of the displaced people toward educating their children has been excellent.”

It does not seem that there are indications that the displaced will return to their cities or original place of residence, after the displacement operations which have been witnessed by Syrian cities in recent years, and are the most prominent in Syrian history.

Regarding that, Sabbagh says: “I hope to return one day to our house in Aleppo, but it does not seem like that is possible in the near future. We heard that the regime has brought families from foreign countries to inhabit the eastern Aleppo districts as a policy of demographic change.”