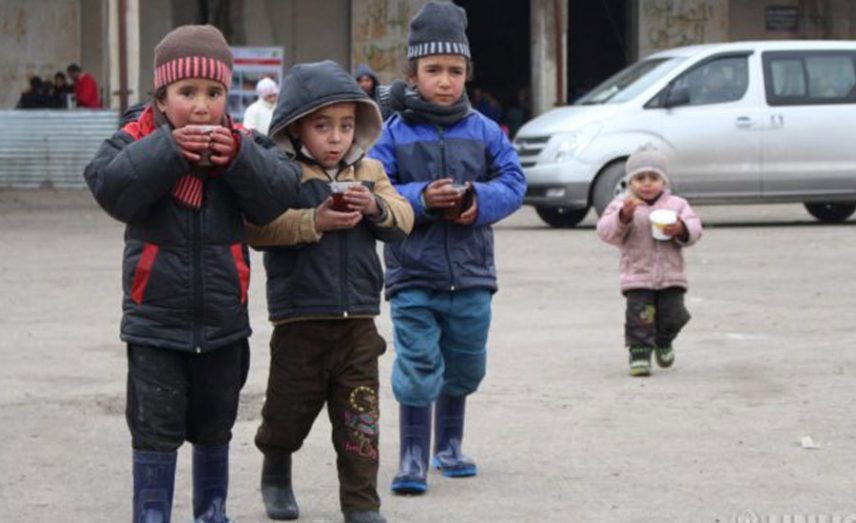 With the spirit and movements of a small child, Reem al-Abdallah, 13, moves between empty seats in a waiting room, asking every moment about the number of patients registered before her on the children doctor’s list.

“She’s still a child in every sense of the word, even though her body has grown,” whispers her mother, Umm Mohamad, who was displaced from the town of Al-Ghariya al-Sharqiya in Daraa province and now lives with her family in the shelter center (Baath Vanguards camp) in Suweida.

She then continues in a voice lowered so as not to reach the ears of her daughter who stands by the door: “For five years and a few days before we were displaced, mortars fell on our home after midnight when we were sleeping, and we awoke to incredible terror. We were covered by the cement dust from the collapse of three walls in the neighboring room and parts of the ceiling falling in. At first glance we couldn’t even distinguish one another’s faces. We went out into the street and into the basement of a nearby building. I found Reem there, who was 8 at the time, and was overwhelmed with terror, crying hysterically. I tried as much as I could to calm her, but we were all terrified, and I considered it normal.”

The young mother strokes the head of her 10-month-old infant, cradling him with her right hand and moving her left in what looks like a gesture of despair and hopelessness as her look settles on her daughter: “It didn’t stop with that night, as the poor girl still wets her bed every night, and sometimes during the day whenever she feels very afraid, despite all our attempts to treat it.”

Reem does not live a normal school life. She went to primary school in her town of Al-Ghariya al-Sharqiya and spent two years there intermittently because of the bombardment and disruption of classes, but she was an excellent student at the time.

With her family being displaced to the city of Suweida and settling in the shelter center there, Reem stopped studying because primary schools' opening was delayed for about two years. But her problem with school was not resolved with the opening of the school, as her health situation stood in the way.

“At the beginning there were no classrooms at the Vanguards camp, and none of the families living there were allowed to send their children to the nearby town of Rasas' schools, or accompany them and register them there, because of the siege policy we were experiencing. After that, residents insisted on opening the schools but they were not prepared, most importantly with regard to specialized staff, who were not good at dealing with the displaced children. They were dealing with them like they were patients or inferior human beings, acting ashamed of them and dealing with them with disgust, which is what happened with Reem on the first day of formal classes,” says Umm Mohamad in a voice that has begun to be obscured by quiet tears.

She continues: “On that day, one of the teachers mocked Reem after she heard one of the students commenting on her urinary problem, and demanded that she stand away from the teachers table and sit in the last chair so as not to disturb them with her smell.”

The young girl wasn’t able to bear this and left the class refusing to return.

Reem’s situation is an example of what displaced children may face in terms of negative treatment in school, and their situation gets especially complicated when the school staff is not well qualified.

Reem comes over to her mother to ask again about how much time is left and then follows up her question with another about the possibility of walking in the market after finishing at the doctor, and her mother promises her this on the condition that she comes back at the time imposed on them and recorded on a permission paper obtained from the center administration.

“I was forced with every doctor’s appointment to beg for this paper from the camp leadership,” says Umm Mohamad, looking for the “exit permit” in her wallet, and then her features change and she looks overwhelmed.

“We are dealt with like prisoners there. I’ve had to cancel more than one appointment with the doctor because the administration for unknown reasons has rejected the request to leave. Although this girl’s life and future are connected to her treatment, this means nothing. If one of them is in a bad mood, that could lead to us being forbidden to leave or even deprived of food sometimes.”

The mother turns to aiding her oldest son, Mohamad, who is helping Reem learn some basics of reading and writing. She also used to use some activities set up by UNICEF inside the camp, which offered displaced children some drawing, music and story workshops.

But these recently stopped, about two months ago, ending the only outlet for Reem and many children who are unable to go to school, for various reasons such as the diseases which have spread rampantly inside the shelter center, which is totally neglected in terms of health, or because of psychological problems that many children suffer from as a result of having severe psychological shocks, including delayed speech, stuttering or severe depression.

The displaced who live in the shelter centers are at the mercy of the mood of some workers in issues related to the exit permit, and this impacts their opportunities to resolve their problems.

“Finally… there is one patient and our turn has come,” says Reem, with joy on her face.

The expressions of excitement which covered her expressions revealed her desire to enjoy the stroll promised in the city’s market, which contains shops the young girl does not know and food stalls whose taste she has forgotten over the last five years.

But because of her enthusiasm she reveals the secret of this joy when she says to her mother: “You promised me before that you would later buy me a notebook and a pen with a bird’s head. Today is later.”