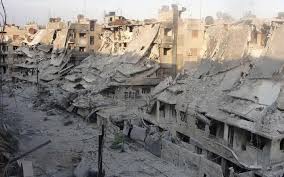 Prime Minister Imad Khamis reiterated the importance of developing a vision for the reconstruction of the Damascus Ghouta that includes all areas which were subjected to destruction and terrorism, during his meeting with the concerned ministers and the governors of Damascus and its countryside and a number of concerned officials.

The meeting was held in order to start developing a new identity for the regional planning that accords with the development zoning and to come out with plans more appropriate for the current situation and in line with the current conditions for rezoning the areas of the Eastern Ghouta, Douma, Jobar and various areas in Damascus.

He also confirmed that the necessary initial plans for reconstruction would begin development immediately, saying there was no alternative in various informal and destroyed areas in Damascus and its countryside.

Those in attendance stressed the need to clear the areas of informal settlements and infractions, whether in Damascus or in the Ghouta, Douma and Jobar, confirming the need to remove these infractions as there is a whole city of tunnels that need to be removed completely.

This led Damascus Governor Bishar al-Saban to say, “Before taking a decision to remove this or that building, we need to develop a vision for the organizational plan and work in accordance with a strategy, if there is a possibility of addressing the situation.”

He added: “What is important is that we are in severe need of an organizational vision for the whole area.”

Saban noted that Barzeh, Jobar, Al-Qaboun and other areas would be reorganized and that the organization would not be left as it was.

He said there were mistakes in the planning and development zoning and that “we must study what was done before, as the infractions cover more than half of what was planned and organized, which requires clearing most of them in preparation to reorganize and rebuild again.”

Saban pointed to the need to mobilize the necessary mechanisms to remove dangerous buildings immediately and to benefit from what was learnt in the previous reorganization of destroyed and informal areas in an up-to-date way, whereby the new general development vision for Damascus will be developed “because there are hundreds of hectares where a floor or two have been built, and this cannot be allowed to continue.”

There was an agreement during the meeting to mobilize capabilities, including those of the administrative units, to clear all areas of dangerous buildings first and then rubble second, with that to begin in various areas immediately.

The meeting addressed the need to address the rights of owners of informal houses and violations, especially as the owners may have paid everything they had – this was a point stressed by the primary minister, that “we will not take anyone’s right and everyone who can prove their ownership of the land will have a share in the organization, and people will be given their rights in accordance with the regulations and laws.”

Khamis stressed the importance of developing a plan for the tunnels which are spread across huge areas and using them as much as possible after a full study of them and the places where they are located, their coordinates and solutions to address them.

It was agreed that there would be a follow-up on the results of the work supplied to the cabinet on a monthly basis to examine the future working mechanism related to opening the roads, clearing rubble and dealing with buildings due to be demolished.

It was stressed that development will not be expanded at the expense of agricultural land, preserving the agricultural character of the Ghouta.