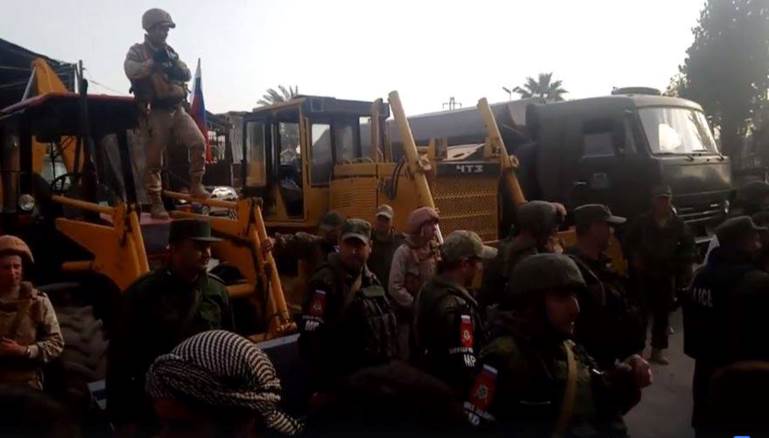 Ten days after the chemical massacre in the city of Douma in Damascus' Eastern Ghouta, the issue continues to stir global public opinion, and comprises a major challenge for the international community and a threat to the Assad regime and its allies, including the Russia, as more facts are revealed that confirm the regime’s complicity in the massacre and the Russians' tampering at the site.

Russia rushed to implement the Douma deal with Jaish al-Islam to evacuate the city of rebels and those who want to head toward northern Syria. Russia did not wait for the last “militant” to leave the city before it entered, in contrast to its previous policies in other areas that were subjected to forcible displacement.

The Russian police entered Douma while the displacement was ongoing, and "The Godfather" of the deals in Damascus and its countryside, Russian Col. Aleksander Zurin, visited the scene of the crime three days after it occurred without any competent neutral international authority to search for the chemical weapons.

A rights source told Al-Modon that the Russian police entered the site of the massacre in the Al-Nouman mosque area more than once in order to tamper with the area and to pull out evidence. The Russian media machine is working alongside the Assad regime to create fake testimonies fabricated to contradict the facts. However, the evidence held by the groups which have document the crime all indicate the regime's culpability.

Experts from the Organization for the Prohibition of Chemical Weapons were blocked from entering Douma when two car bombs exploded in the city, the first security incident there since the beginning of the expulsion agreement. A local source told Al-Modon that the two bombs occurred near the city’s market and were less than a kilometer from the site where the chemical weapons struck. Activists told Al-Modon that the incident was intended to create a pretext for preventing the committee from entering until they had removed all evidence.

Russian forces brought heavy machinery, including trucks and cranes, into Douma, on the pretext of beginning repair work and removing the debris of war from the city. The vice president of the regime’s provincial council for the Damascus countryside, Rateb Adas, published a video clip on his personal Facebook page on Monday showing Russian military machinery and said: “We’re here with our friends the Russians to receive a gift from the Russian Federation to the Douma city council. This machinery is to help clear rubble and remove debris which you’ve seen in the city.”

According to a medial source who left Douma after the chemical strike: “The evidence, testimonies, documents and sample taken out of Douma with displaced people prove the regime’s complicity in the crime.” According to the testimonies of these doctors and paramedics, what happened was initially unclear, and what made it seem to be a chemical attack was that there were “cases of asphyxiation because of the bombing and dust.”

The regime and its Russian ally on Tuesday offered the OPCW delegation a meeting with these doctors and paramedics on the condition that the meeting occur in Damascus and that they not go to Douma to review the site.

Al-Modon spoke with three groups concerned with documenting violations in Douma city who said that there was decisive evidence of the regime’s complicity in a chemical strikes. A source told Al-Modon: “All the evidence, samples, medical analysis, testimonies, patients, videos and documentation confirm what we are saying.” He added that “a full-bodied missile did not explode and remained in place, and if it was pulled out after the expulsion, this is evidence that the Russians and the regime are tampering with the crime scene.”

Another source told Al-Modon that the documents and videos which have been published about the chemical attack in Ghouta are part of the documentary archive of the strike. There are videos and images that have not been published in the media which have been sent to international bodies, in addition to there being other evidence such as the clothes of some of the victims and samples from the crime scene, in addition to hundreds of wounded people from the chemical strike reaching northern Syria bearing signs of the strike.

The source added: “We have documented everything and we have evidence. But we are looking for an entity bearing the full responsibility for the crime, its victims and the witnesses.” He said: “The witnesses to the massacre who left for northern Syria are in danger, which justifies their silence about the incident.”

Witnesses to the incident are afraid of making statements about their testimony. Lawyers, doctors and victims leaving the Ghouta does not mean that they are safe. According to what a witness told Al-Modon: “The security breakdown in northern Syria and the fact that regime branches can reach targets in opposition areas has put our lives in danger if countries and international groups do not bear the responsibility of protecting us and undertake the investigation with sources and victims.”