Islamist rebels are undermining the work of the key institution in northern Syria, according to Zeitoun 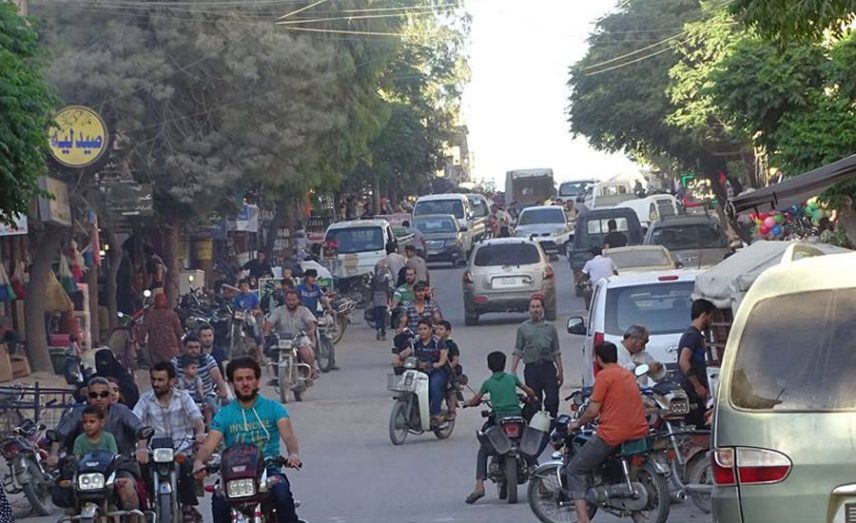 Since the establishment of the Free Police in Idleb province and the start of its work, rebel groups led by Hay'at Tahrir al-Sham (the Nusra Front) and Ahrar al-Sham have placed obstacles before this vital institution.

The reason for this is these groups' desire to monopolize control of cities and towns and not share their administration with any other body.

This intervention has deprived the police agency from taking opportunities, as well as from tools that would enable it to carry out its work, such as light weapons. It has also robbed it of its powers when it comes to arresting members of these groups and holding them to account.

Despite the fact that the police agency had opportunities to succeed, represented in their members being close to residents and their well-liked social activities, the rebel groups bullied the agency and repeatedly attacked its stations.

The members of the Free Police have faced major risks carrying out their security work, thanks to air bombardment and the general spread of weapons – all of which have reduced the agency and limited its tasks to the point that it has nearly vanished at many points.

Former commander of the police brigade in Idleb Ahmed Bajan said: “The biggest problems and dangers which the police face in their work include the need to obtain prior permission and approval from the rebel group commanders to arrest one of their members. In the event that there is a need to bring in one of the members of a rebel group, the police must send a message to the group’s command, and then they either allow or reject the arrest. If they reject it, the police cannot arrest the member no matter the charge against him.”

The head of the Free Police center in Saraqeb, Awad Karya, said that the police’s work faced a number of difficulties and problems, including the low capacities and number of members, as well as the large number of rebel groups, which has created a kind of confusion in terms of security jurisdictions.

In addition, there is a large number of judicial authorities and a lack of a body bringing together security forces and coordinating between them, in addition to some ideas which are fixed in people’s minds about the behavior of the regime police previously.

Regarding the center’s independence and the interference of rebel groups in its work and its relationship with them, the director added: “The police center is totally separate in its work from any other body. Good relations tie us to the rebel groups in the city, while there is joint coordination with it and with the courts. We transfer thorny issues, such as accidents, fights and otherwise, to the court if we are not able to reconcile the two parties. There is also full coordination and cooperation with the court if it needs support or vice versa.”

The former head of the police department in the Sharia court in Kafrenbel, Abdel Nasser Salloum, said that the factionalism, number of courts and overlap of competencies and military jurisdictions was one of the biggest obstacles to the police’s work.

In July 2015, members of the Nusra Front, before it became Hay'at Tahrir al-Sham, stormed police centers in Kafrenbel, Kafr Sajna and Khan Sheikhoun, and confiscated and burned equipment and arrested some members of the police force, then releasing them hours after the arrest.

One resident, who asked not to be named, said: “We used to feel safe and secure with the presence of the Free Police because there were patrols at night, but they were not able to remain in the city because of the violations of some rebel groups.”

Hay'at Tahrir al-Sham made a number of areas transform revolutionary police centers into “Islamic police” under its authority, after it took control over most areas of Idleb province at the end of last July.

The battles between Hay'at Tahrir al-Sham and Ahrar al-Sham, and the Hay'at’s control over the whole province on July 23, 2017, led to the dissolution of the security brigade in the city of Banash, which was followed by an increase in theft in the city and the appearance of some cases of kidnapping, which were new to the city and its residents, as well as an increase in security violations and a deterioration of the security situation.

The role of the Free Police also declined in the city of Al-Dana in favor of Islamic police under Hay'at Tahrir al-Sham, which began to take control over the situation in the city.

The presence of Islamic police stations in Al-Dana was not new, but their role had been secondary to some extent with the presence of the Free Police, who had the main role in the city as the connection between the citizen and the court, responsible for writing references and transferring them to the court.

Jaish al-Fatah, which was administering the city at the time, promised the Idleb city council that a Free Police agency would be formed to manage the city’s security, but that has not yet been implemented, like other service institutions in the city.

This is what some see as the best solution to the security problem in the city, which is still in a state of chaos.