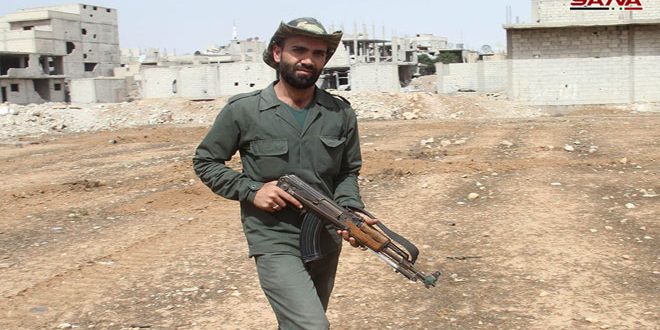 Under the whizz of bullets, booms of artillery shelling and the roar of warplanes in the Al-Hajar al-Aswad area in southern Damascus, the soldier Hassan Shaddoud tells us that he became a father 24 days ago. He is anxiously awaiting a leave to see his newborn son.

Since he joined the ranks of the Syrian Arab Army five years ago, Shaddoud has moved between the front lines of Yarmouk Camp, Al-Qadam and Al-Hajar al-Aswad.

“The front is blazing. We will continue to fight until we liberate the country and get rid of the terrorists,” he tells SANA.

“My father called me and told me that I became a father. But till now I have not seen him,” Shaddoud says. “I will see my son after liberating Al-Hajar al-Aswad,” he adds.

“When I saw his picture I cried and laughed. It was an incredible and unique feeling,” says Shaddoud.

Four months have passed since the last time Shaddoud saw his family. Since he was married a year ago, he was granted four leaves, 72 hours each.

“Our duty is to protect the country and make Syria better than it was,” Shaddoud tells us as we move from one street to another amid the destroyed buildings as a result of tunnels dug by terrorists.

Asked if he feels scared of being killed on the front line before seeing his baby boy, he replies: “I felt this even before he was born when the battle intensified in the area of Al-Hajar al-Aswad. My fear has grown after my son was born. I do not want him to live without me.”

“I named my son Adam after one of my comrades who was martyred in the early days of the battle,” says Shaddoud, adding: “I knew him for only three months but it was enough for us to become best friends.”

What is his full name, we ask. “All I know about him is that his name is Adam and they called him Abu Arab,” Shaddoud says before we leave the area.