Charging for travel documentation is a key resource for the Syrian regime, Sada al-Sham reports 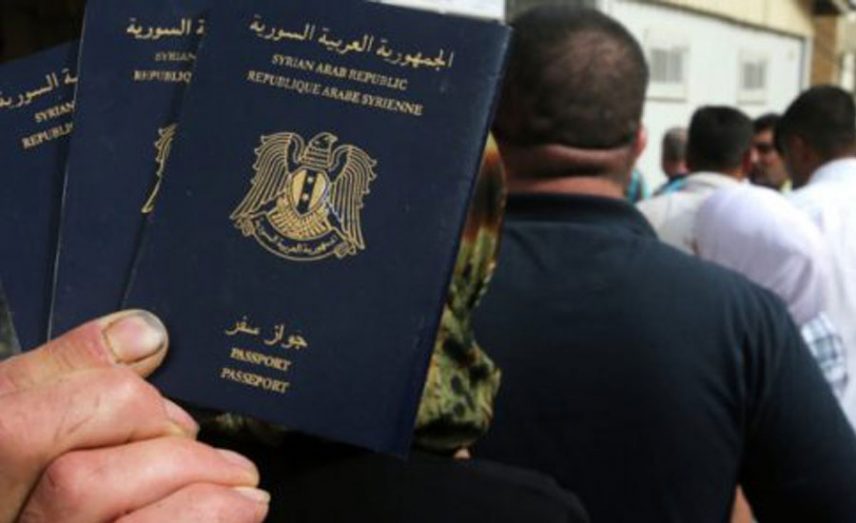 The Assad regime’s returns from issuing passports during the year 2017 reached 24 billion Syrian pounds, which has entered its coffers after being collected by the Passport and Migration Administration and the Foreign Ministry from the pockets of Syrians inside and outside the country.

A source in the Assad regime’s Passport and Migration Administration told Sada al-Sham that the government had collected throughout 2017 more than 24 billions Syrian pounds through granting passports, whether to those living in Syria or those migrating from it, who now number millions in various countries of the world.

A passport is one of the greatest needs for Syrians outside the country, especially the young people who wish to continue their university studies or to join the labor market, or for those who want to move from one country to another.

The source said that the Passport and Migration Administration up until the end of 2017 has issued more than 470,000 passport documents of both standard and urgent varieties inside Syria, at a value of 12,700 Syrian pounds for a normal passport, and 30,800 for an urgent passport, with the value from these documents issued internally reaching more 4,720,000,000 Syrian pounds.

The source added that the value of the passports issued through embassies and consulates outside Syria was more than 20 billion Syrian pounds, or about $45 million.

To the pockets of killers

Assad regime government revenues from identity documents issued to Syrians at relatively high fees are one of the most important sources for the budget, of which the largest portion is spent on the army and allied militias and the continuation of the war against the Syrian people waged from 2011 to today.

The revenues for passports alone were about 1 percent of the budget revenues for 2017 which reached 2,660 billion Syrian pounds.

In contrast, these funds which Syrian pay in exchange for obtaining identity documents are a material burden for many, especially refugees in the three neighboring countries (Turkey, Jordan and Lebanon) who have few work opportunities or sources of money.

Ahmed al-Hajj Ali, a refugee from Idleb city living in Turkey, is trying to complete his studies which were cut off because of the war, and his need for a passport is great in light of the fact that most grants or jobs require one. Recently, a university sent him a message and asked for a travel document, which forced him to get an urgent passport from the regime consulate in Istanbul.

Al-Hajj Ali told Sada al-Sham: “The fees I paid the consulate were $800 in addition to a $200 bribe I paid to get a turn in the queue of many requests, meaning the passport cost me more than $1,000, or more than the value of six months wages working in the factory where I work.”