A huge number of Syrian have fled to Turkey, many of which have either resumed their businesses or started new ones writes Sham Times 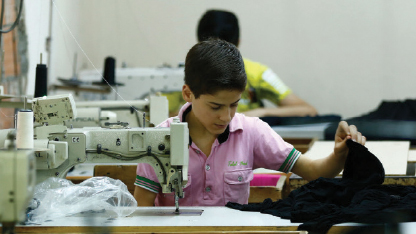 After the Turkish regime stole a large number of Syrian factories and skilled workers during the war being waged on the country, a report had discussed the flourishing of Turkey’s economy, noting its dependence on hundreds of Syrian projects.

A report by Agence France-Presse from the Turkish city of Gaziantep, which is about a hundred kilometers from Aleppo and hosts about half a million Syrians, said that the city’s “hundreds of Syrian businesses are thriving in a boost both for the displaced community and their host country”. There are 3.5 million Syrians registered in Turkey, most of them benefiting from humanitarian aid offered by Ankara and international donors, but a large portion of them are also working.

The report said that the Syrians had arrived to Turkey with both skills and customers. A portion of them resumed their former business activities to secure a livelihood or continued the profession that they had been practicing before the crisis. More than 6,500 companies have been founded or co-founded by Syrians in Turkey since 2011, according to the Chamber of Commerce and Stock Exchanges in Turkey. The report quoted the Syrian Economic Forum which helps develop business initiatives among the Syrian community as saying that this number was more than 10,000 if the informal sector is taken into account.

The report gave a number of examples, saying that Amer Hadri had resumed his potato chip making and packaging company which he had been operating for more than 20 years. Hadri said: “Before we exported to the Arab world but since we set up in Turkey, we have realised our ambition to export to the whole world.” He said all the packages had the “Made in Turkey” label which was a “guarantee of quality” in European markets.

The report noted that there were more than 1,250 Syrian companies registered with the Chamber of Commerce and Industry in Gaziantep, where a large number of Turkish made products are from.

Rami Sharrack, deputy executive director at the Syrian Economic Forum said that Syrians had contributed to the Turkish economy; and in a report published in January 2018 by the International Crisis Group it said that the presence of Syrians added about three percent to Turkish economic growth in 2016.