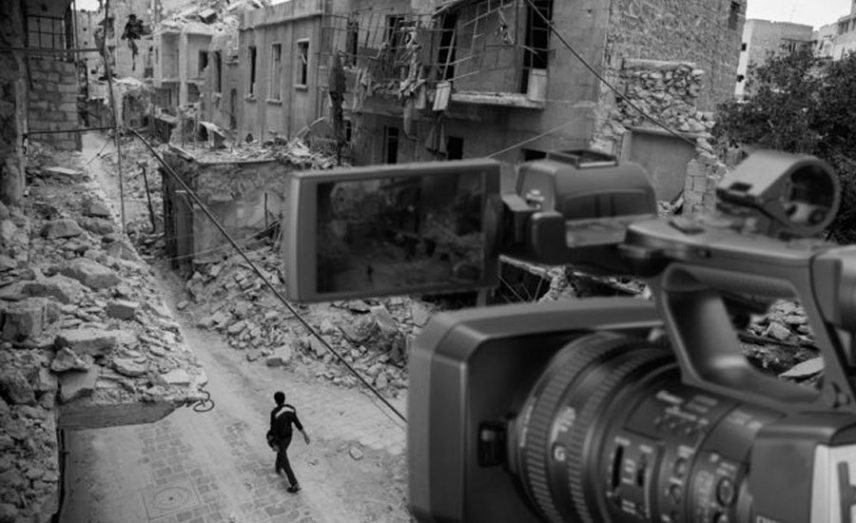 Journalists in areas controlled by rebel groups following Operation Euphrates Shield have been subjected to numerous violations by armed groups, indicating a decline in media freedom in these areas that have been freed from ISIS and the Assad regime.

Despite the aggressions against media crews in this area, journalists have not yet been killed or tortured, crimes that the Assad regime has regularly committed, but it does indicate that journalists are being gagged in areas which were originally liberated from the regime and ISIS, in part, to establish a free and strong media there.

The past few days have seen a number of journalists subjected to aggressions, ranging from being struck to insults and equipment being confiscated. The victims have been Syrian journalists working to help the revolutionary and Arab media which backs the Syrian revolution.

Armed men last week attacked the photojournalist Omar Hafez and a Syria TV correspondent Wael Adel, at the headquarters of the Syrian Interim Government in Azaz city in the northern Aleppo countryside.

Sada al-Sham’s sources confirmed that the aggressors struck the photographer and the correspondent, and insulted them and the Syrian revolution, before confiscating their equipment and cameras. The sources also said that the armed men arrested the photographer Omar Hafez for a few hours, handcuffing him and putting fabric over his eyes to prevent him from seeing.

The sources said that the group that arrested the journalists were not wearing any military uniform and did not identify themselves or the faction they belonged to.

In response to this violation, a media activist from Azaz intervened and told them that the people they attacked were well-known activists in the area. This intervention led to them being freed, although their equipment remained impounded. They were transferred to the intelligence headquarters on the Syrian border known locally as “al-Ma’asra.”

They also chanted slogans such as “death and not humiliation, the media is free,” and “the intelligence shabiha has attacked the voice of truth,” and “insulting the revolution is a red line,” among other slogans.

As a result of this incident, the Syrian Media Activists Union issued a statement in which they called for the arrest of the perpetrators and for them to put before a fair court due to answer for their aggression against media activists who were also union members, as well as uttering obscene words against the revolution and its revolutionaries, insulting all the sacrifices of the revolutionaries throughout the past years, as they put it.

The union called for security forces to “clean their ranks of mercenaries and the immoral”, while also urging demonstrations and protests to continue until their demands were met.

The union called on the Free Syrian Army to “take a serious stance to end violations against journalists and hold to account those who dared to insult the revolution.” They stressed the need to “issue an arrest warrant for the security group who carried out the aggression, and for them to appear before a civilian court, and to guarantee the safety and rights of media activists so that they are not attacked.”

The incident in northern Aleppo did not summarize the entire scene, as there have been more serious incidents which have claimed the lives of journalists in the country’s south.

Unknown men last Thursday assassinated the media activist Ibrahim Abdel Rizak al-Menjar, shooting him in front of his house in the town of Saida in the eastern Daraa countryside. Menjar was one of the first media figures to appear in Daraa province, joining the revolution as a journalist to cover violations during its first days.

Menjar worked as a correspondent for the Shaam News Network and a number of other media and radio outlets. Over the years he covered a large number of battles, arrests, and the storming of cities and towns, and various stories from the Syrian street.