Idleb is home to millions of displaced people, from all over Syria, who are working to create a new home writes Souriatna 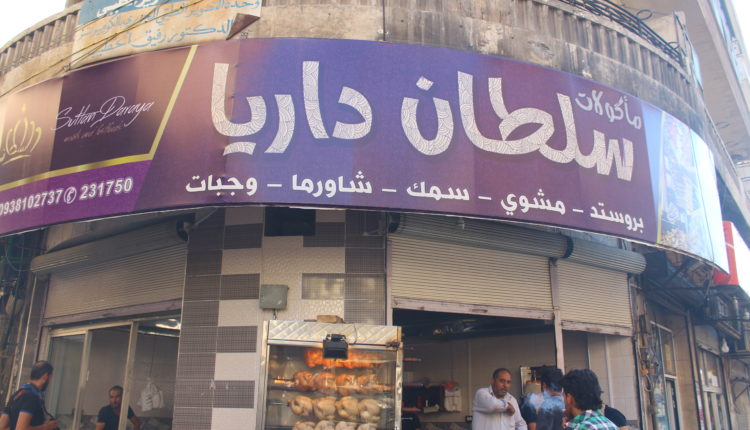 In recent years, the Assad regime has been undertaking a program of demographic changes, with Idleb province being the first destination for most of the displacement agreements that they have imposed on the residents of evacuated areas. Idleb now contains millions of displaced people from various parts of Syria. This raises a question: Will the gathering of displaced people in Idleb support the area’s economy and strengthen the social fabric or will it hurt the interests of Idleb’s original residents and sow new social divisions?

After every campaign, displaced people try to start a new life in Idleb by entering into the commercial markets and reopening stores. Most of them had distinctive professions before they were displaced.

Firas Bakran, an Idleb resident, told Souriatna: “The markets have come to resemble a blend of different Syrian traditions, with dozens of people practicing one profession. This has led to economic competition that has hurt the interests of the original residents through the opening of similar projects which the difficult security conditions have imposed, and their lack of desire to open large projects that aren’t present in the markets.”

The forcible displacement of people to Idleb has also contributed to a rise in rental prices as a result of the high demand for houses and stores. Renting a house ranges between 45,000 to 70,000 Syrian pounds, and a store between 20,000 and 50,000 pounds, in addition to having to pay three months in advance with a security deposit.

This was confirmed by Abdulqader, from the city of Harasta, who said: “Just because you were displaced from your city, you’re exploited. The rent for my shop had been 30,000 pounds, the owner now demands 65,000 pounds, and the unemployment among displaced people and their inability to find work is making the problem worse.”

Amer Kashkash, a resident of Idleb city, said that “the displacement of Syrians to the north has helped revive the area’s economy by raising the rates of sales, purchases and commercial transactions, as well as some displaced people opening small workshops or stores and employing laborers.”

Economic researcher Younes al-Karim said “The continuing informal economic activity and the conflicting economic interests in light of the absence of any economic system in opposition areas will lead to negative effects, including the deterioration of living conditions and a trend toward militarization, as people submit to carrying arms to secure their needs, and will reach the stage of guerrilla warfare.”

The people who were forcibly displaced to northern Syria suffer from a lack of material capacities as a result of sieges which lasted for years. They depended on household plantings and a trickle of aid and now find themselves now facing difficulties, which prevents them from opening economic projects to sustain themselves, such as the security breakdown, ongoing military operations and confusion in political decision-making.

Despite the high density of displaced people who all have some profession or another, economic activity in Idleb is still limited. Moataz Lababidi, who has a metal workshop in the industrial zone in Idleb, attributed this to the “recent heavy bombardment by warplanes on the province. The deterioration of the security situation has made all those thinking about setting up a large or small project refrain because of the lack of guarantee about stability in the future or out of fear the facility will be struck.”

Karim said, “If we want to draw out a scenario for putting projects to work that aims to develop and create economic stability in the northern region and to employ displaced people, a number of conditions need to be met. Firstly, government and representatives for the areas must work with aid groups and civil society groups to support small projects. In addition, attention and support needs to be paid to the currency that is selected and used, or confusion will result in organizations being unable to invest.” Karim added: “Work also need to be done to secure the necessities for Turkish government projects, and they should pledge to protect them from bombardments by regime forces and from military factions on the ground. There also needs to be an attempt to draw in professionals to set up training courses, as well as the need to pay attention to the currency in circulation and how it is circulated.”

He continued: “It is expected that organizations will settle agreements with the Turkish government to secure primary materials needed to support industry in northern Syria, which ensures support for the Turkish economy. Turkey has an interest in these projects continuing and in monitoring them, and halting the importation of basic goods from regime areas.” He said that, “The regime will try to derail these projects when they realize that opposition areas are headed towards stability.”

Bassel Tanari, a financial official in one of the civil society groups active in Idleb, said that the economic development of the north will require organizations to cooperate with local councils and the government, in order to offer small projects that aim to offer services to residents, including water, electricity, health and so on, in addition to setting up projects such as sewing workshops, through which workers can be employed.

Bassel added that “the presence of hundreds of thousands of displaced people in a single area is a double-edged sword for the economic situation. First, if they cannot be absorbed and jobs provided for them, this will be an economic disaster for them and for the original residents. Secondly, providing opportunities for them and helping them increase their skills will open economic sectors not present in the north.”

Forcible Displacement Has Not Broken the Social Fabric

Since the forced displacements began, residents in northern Syria have worked to receive displaced people from different parts of the country with all available means, and the commercial markets have witnessed signs offering free food and clothes to displaced people.

With the formation of a new social fabric, displaced people have begun to acclimatize to their new circumstances and seek a dignified life far from the sieges they endured. Damascene, Homsi and Aleppan people can now be found at a single table trading stories and memories of their former lives.

The social integration has not stopped at the shops, but has also included instances of marriage between residents of Syrian provinces, with Damascene and Homsi ‘arada wedding bands raising their voices at more than one wedding party, among the residents and displaced people of the region.

Northern Syria has also occasionally seen disputes and fighting between a small number of displaced people and original residents, escalating to the use of firearms and people being wounded, which has pushed the security forces to intervene, which Salama explained by saying: “It cannot be said there is total agreement in terms of customs and traditions. While there is the same general feature among Syrian traditions, each region also has its own customs.”