Despite the decision by the Syrian Democratic Council to enter into talks with the government, the situation east of the Euphrates remains unclear writes Al-Watan 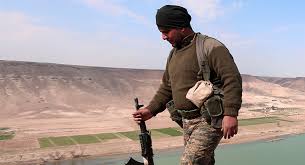 Details about the direction of the country’s northeast have started to become clearer. The so-called Syrian Democratic Council, which is the political face of the Kurdish People’s Protection Units (YPG) supported by the United States, set out their position, explaining that they plan to take control over the eastern Euphrates in order to implement the Western project that aims to divide Syria.

A spokesman announced the council’s readiness for talks with the legitimate central government in Damascus, without preconditions, to reach a solution for the eastern Euphrates area.

This was a clear response to the comments made by President Assad in a recent interview with the Mail on Sunday, in which he said that now the Syrian Arab Army was in control of broad parts of the country, the Syrian Democratic Forces (SDF) were “the one remaining problem.” He added that the government has two options for dealing with them— either dialogue or a military solution. It seems that the Kurdish parties are heading toward the first choice, which Damascus has welcomed, while remaining in a state of readiness to head towards a military solution, which is not out of the question. This could quickly be resorted to in the event that Kurdish groups are not serious about returning the area to the embrace of the state.

Along with this development, the Kurdish parties are quickly grabbing on Damascus’s initiative and their position regarding foreign intervention in Syria, and it seems the Americans have tried to work through various avenues to derail the option of dialogue if it is opened, or the option of military action if it is resorted to. In recent hours a number of actions have been taken by America, either directly or through its proxies, to impede Syrian efforts to complete the liberation of remaining Syrian territory and restore security and stability to the country.

In the context of American aggression, attacks carried out by the Islamic State, which have clear American support and have targeted Syrian military centers between Deir ez-Zor and Albu Kamal. It is true that the Syrian Arab Army and its allies have crushed these attacks, but the fact they were carried out, with American support, has a meaning that cannot be ignored.

From another angle, America has very crudely put pressure on the Kurds in order to prevent them from entering into dialogue with the Syrian government because America views the opening of dialogue as an impediment to its efforts and plans to divide the country and retain a presence east of the Euphrates.

The area east of the Euphrates seems to have been put in the line of fire, between the Syrian government’s decision to liberate the area and the aggressive American decision to continue to occupy the region — but Syria’s determination to establish its regional unity whatever the obstacles has become clear and the coming days will certainly see the implementation of this determination.