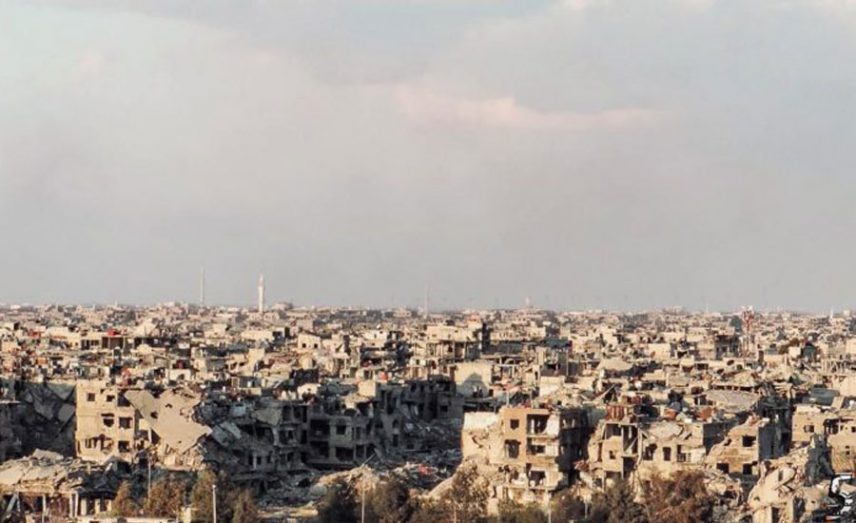 About two months after the Syrian regime issued Law No. 10 which allows for the theft of Syrian property, Assad has begun to reap the rewards of the law. The start of rezoning in the al-Qaboun and Joubar districts in Damascus, both emptied of residents, was announced, which has raised fears among remaining residents, due to their inability to carry out any of the steps needed to establish ownership of their property.

Bashar al-Assad issued Law No. 10 at the start of April, which established organizational areas within the general organizational plans for administrative units. However, lawyers and legal experts have warned about the danger of this law, which is considered the final piece in the criminal demographic changes that the regime has been carrying out since the eruption of the revolution.

According to the law, original property owners can allocate shares or be part of a joint stock company as partners in common, and if they reject this, the administrative unit can sell their shares in a public auction, and corporate legal entities of unknown identity can benefit.

It has been two months since the law was issued and a member of the executive office in the Damascus governorate, Faisal Sarour, has revealed that to start with, violations in two areas will be rezoned. The two areas are Joubar and al-Qaboun in Damascus. Other areas, whether zoned or in violation, will come later.

Meanwhile, regime militias have obtained agricultural crops in a number of villages northwest of the city of Hama, including the villages of al-Safsafiyah and al-Tremseh, within the framework of Law No. 10, whereby they brought agricultural harvesters and began to harvest crops.

Activistis said that regime militias informed residents that they would impose Law No. 10, through which they will obtain all the land whose owners are absent, especially those who have fled the country.

The regime’s Foreign Minister, Walid al-Muallem, resorted to evasion when he said that the time period for residents to establish ownership of their homes in the areas which were recently taken had been extended from a month to a year, under penalty of seizure and liability for those who do not prove ownership of their house or store.

Muallem added that “Those who read the law find that the methods for establishing ownership are easy and simple.” Muallem claimed that any Syrian outside the country could designate relatives up to the fourth degree to establish ownership.

In response to that, the President of the Free Syrian Lawyers Association, Ghazwan Qaranfil, told Souriatna: “Decree No. 10 is a law, and so any amendment needs to be issued following a decision from the parliament or a decree from Assad. Therefore, Muallem’s talk about an extension of the timeline for proving ownership from a month to a year are just media statements to evade the issue and do not have any value or weight.”

Qaranfil added: “Even if they really did extend the time, this is not a solution because the problem is not just about the time, but the problems and risks for people’s rights contained within the law. Therefore the question is not whether the timeline is or isn't enough, but if this law violates the constitution or not and to what extent it deprives citizens of their property.”

The Syrian Human Rights Council said that the regime had purposefully destroyed ownership registries in opposition areas to prevent residents from establishing ownership, with regime forces bombing property registry buildings in the center of Homs city on Jul. 1, 2013, despite it being in an area far away from the fighting. The fire that resulted from this bombing led to the destruction of property registries in the city.

The Human Rights Watch organization documented between July 2012 and November 2013 extensive demolitions and evacuations carried out by the regime government in Damascus and Hama under the cover of urban organization.