Despite the expulsion of ISIS from the city, residents of al-Bab are still living in fear of trigger-happy groups that are heavily armed writes Sada al-Sham 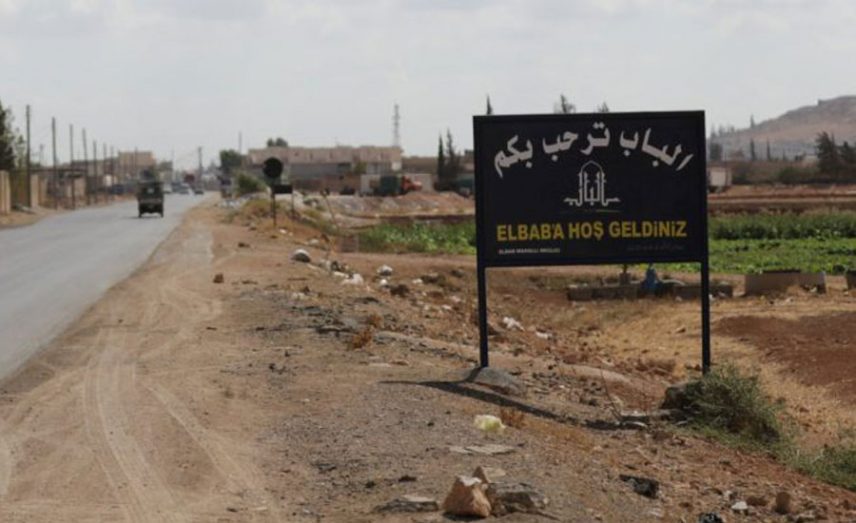 Months have passed since the expulsion of the Islamic State from the city of al-Bab in the eastern Aleppo countryside, and life has returned to the city — but it is not a life free from oppression and injustice, due to the spread of weapons in the city and the people loyal to opposition groups who use them to solve any casual problem that arises.

“We were under the oppression of men who wore black and had long beards, and now we are suffering injustices from a handful of hashish-smoking criminals,” says al-Hajj Abou Amer, speaking with Sada al-Sham about the situation in his city.

Abou Amer, a man in his 60s born in al-Bab, who has not left it for a day, even when it was under the control of ISIS, spoke with fire about his city, which he said deserved better: “The revolution started and our city did not delay in following it. We all rose up against Assad and stood against oppression. Then we were afflicted by ISIS, which came, so they claimed, to impose Islam, although they were ignorant of it. Once ISIS was pushed out they raised the banner of justice and freedom and then surprised us with the opposite.”

Abou Amer adds: “The living situation is no longer tolerable. There are armed men in the roads, in the houses, and everywhere. They have left the frontline battles against the regime and now fill the roads, brandishing their weapons and terrifying residents.”

Abou Amer’s speech is confirmed by the scenes anyone sees on al-Bab’s roads, or any of the cities under the control of the Euphrates Shield operations room — the military operation that was established by Turkey in 2016 to fight ISIS and the Syrian Democratic Forces (SDF). Despite a limited presence of what is known as the National General Security Forces or the Free Police in these cities, rebel groups have not disappeared from the cities, and their fighters and leaders still continue to disturb the lives of the residents and those who have come to them after being displaced from other Syrian areas. These displaced people now number 150,000 at the end of last month, according to estimates from those following the issue.

Many believe that the violations will not stop until the rebel fighters leave the city centers.

One of the leaders of groups in the northern Aleppo countryside  — asking not to be named for personal reasons — told Sada al-Sham: “Resistance members and fighters with no self-control or manners have turned into bandits. This is our situation here in the northern Aleppo countryside. Many of those with weapons have turned into thugs and bandits and people have begun to hate them and want to be rid of them.”

He added: “All fighters need to leave the cities and be distributed on the front lines which is their natural place. The courts need to be activated and more power and authority given to the police agencies. All this is the responsibility of the Turkish state and Turkish army, who are responsible for this area.”

Some armed groups in the northeastern Aleppo countryside have not been content to merely take over a number of civilian institutions, or even the personal property of some civilians on various pretexts such as their owners belonging to ISIS or the SDF — they have also gone on to carry out attacks and sow terror. This is what Hamed Boulad, nicknamed “Yaba” did. He was one of the leaders of the al-Hamza division and the brother of the commander of the division known as Seif Abou Bakr. In mid-May Yaba, along with a number of his fighters, attacked three hospitals and their workers in the city of al-Bab and its environs. The attack was recorded by the al-Hikmeh hospital cameras. He was later arrested and one week later he fled from prison and celebrations were held for him in a clear challenge to justice.

The word today is weapons in light of the absence of a real governing authority, and the voices of those who have bullets and the largest number of soldiers are the loudest, according to Aisha, a displaced person from Ghouta, who has lived for about a month in the Aleppo countryside.

Aisha told Sada al-Sham that they are here after seven years of exhaustion: “We lived under siege and under endless bombardment, until we were exhausted by the war and its atmosphere. We thought something would change when we came here, but it seems that things are not much better.”

Aisha hurts when she hears the sound of bullets in the city of al-Bab as a result of the clashes between people, adding: “This is very shameful.” Aisha continues: “I’m the mother of three children and I was hoping for a better life for them and better days than those they spent in Ghouta. I don’t feel very secure and if they go anywhere I’m afraid until they come back. We don’t know when the situation will improve or if it will improve at all.”

A number of groups from Operation Euphrates Shield imposed their control over the city of al-Bab in February 2017 with backing from the Turkish army, following the expulsion of ISIS.

The city of al-Bab and the rest of the cities of the northern Aleppo and northeastern Aleppo countrysides have seen an unprecedented number of residents as a result of the waves of displacement from Raqqa, Deir ez-Zor and the eastern Homs countryside, and the displacement operations carried out by the Assad regime in Damascus and its environs, as well as the Homs and Hama countrysides.