As families and farmers return to the heavily damaged Ghouta, it is hoped that the trees will be replanted and the fields sowed for crops reports Al-Watan 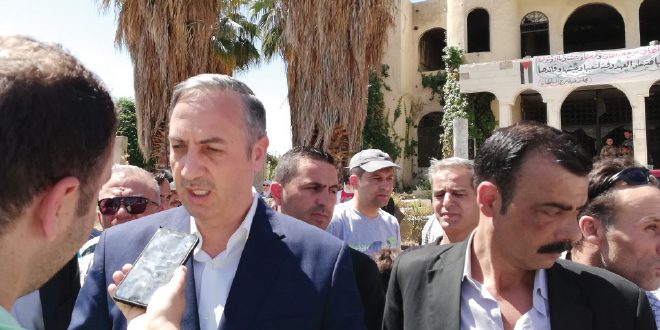 The people of Marj al-Sultan in eastern Ghouta cut the ribbon on the return of residents to their villages with guidance from President Bashar al-Assad. Despite the heavy damage that the war has inflicted on these areas, the joy of the people was indescribable, with some families preferring to remain in their homes even though they lacked even the barest essentials of life.

Al-Watan toured some of Ghouta's villages accompanied by a ministerial delegation comprised of Agriculture Minister Ahmed al-Qadri and the Governor of the Damascus Countryside Province, Alaa Muneer Ibrahim, as well as a number of directors of service institutions.

Ghouta, which had been famous for its green trees and its land that resembled a paradise on earth has mostly turned into arid land, its trees cut down, losing the beauty that had distinguished it. Water has also become scarce.

The deeper we go into Ghouta’s villages, the higher the rates of destruction. The factories and facilities have become ancient ruins that existed, as the expression goes, “once upon a time.” In addition, some areas are totally empty of residents and there is nothing left but a few trees whose farmers hope that their return might mean they can be swiftly revived again.

A discussion of what we saw would last a long time. Ghouta, which was the flower of Damascus, is no longer the green that was sung of near and far, but ruins whose visitors weep.

Alaa Ibrahim, said that within the next two months, the infrastructure and schools will be rehabilitated and residents will return to their areas. He said that this time of year was chosen because it is most appropriate since schools are closed and residents can restore their houses without being subjected to weather factors.

On the sidelines of the tour, Ibrahim told Al-Watan that the schools would be rehabilitated along with the essential roads and transport lines being restored within the next few days. He said that there was an aid plan for the province to assist the residents in restoring their homes, as well as international organizations working in the province.

Ibrahim said that the volume of destruction inflicted by terrorists in Ghouta was large and needed a great deal of work, and that along with the return of residents, basic services would be restored such as electricity, which will return within 20 days, as well as water and other services.

Ibrahim said that the damage to the electricity had cost about 153 million pounds, pointing to government directives to restore the electricity to these areas under an emergency plan until it can be returned formally.

Ibrahim announced that there was a government plan that included giving residents new zoning plans based on vertical construction, saying for example a four-story building could be increased to eight stories, and therefore covered by one contracted which would ease the process for residents.

Ibrahim said that in Ghouta it would all be vertical, saying that public sector campaigns would begin their work today, restoring the roads and bridges and that every area would be granted 100 to 150 million pounds to support the municipalities.

In regards to the agricultural situation in Ghouta, Ibrahim said that a large portion of trees had been cut down. He added: “We have looked for a way to secure high-quality seeds and replant in these areas, as happened in Zabadani.”

Ibrahim said that seeds would be distributed to farmers for free as a form of support, adding that there had been many grants given to them and this comes within the framework of support for farmers.

For his part, Minister of Agriculture and Agrarian Reform Ahmed al-Qadri said that the rate of agricultural destruction was large without providing specifics. He said that the Ministry had started to offer veterinary services to residents and offer fodder for free.

In a statement to Al-Watan, Qadri added that 44,000 vegetable seedlings had been provided to secure needs, in addition to some liquid fertilizers being offer to famers. He said that the most important issue for this was the reestablishment of the guidance unit.