The war in Syria has caused its economy to collapse, but reclaiming the deposits of Syrians from foreign banks could help the economy to grow writes Al-Watan 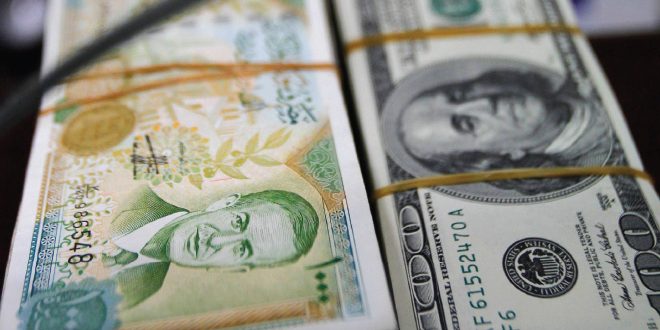 Syrians’ deposits in Lebanon are more than double the value of their deposits in banks operating in Syria (six public banks, 14 private banks), according to estimates from the United Nations, local experts, Lebanese economic officials and official Syrian statistics.

Statistics from 2017 published by the Central Bureau for Statistics in Syria indicate that the total deposits in the six public banks up to the end of 2016 reached 1.38 trillion Syrian pounds, while the total deposits of customers in private banks operating in Syria was about 795 billion pounds at the end of 2017, according to the annual financial statistics from the private banks. This means that the total is about 2.175 trillion pounds, with the possibility of the number rising to 2.2 trillion due to the increase in deposits in public banks during 2017, and with the average official exchange rate in 2017 of about 436 pounds to the dollar, this means deposits equal about five billion US dollars.

Lebanon is suffering from the consequences of a banking crisis that became apparent in the year 2017. Real fears were expressed explicitly by the Head of the Association of Banks in Lebanon, Joseph Torbey, during a speech he gave a few days ago. He said that tax pressures had impacted the banking sector with the issuance of Law 64 for the year 2017, which “introduced a flood of new taxes, most of which impact the banking sector, raising the interest rates and with it the cost of funding the economy in various sectors.”

A number of Lebanese economic and media reports have warned of a decline in levels of consumption and investment in Lebanon over the past few years, despite the country receiving billions of dollars coming through Syria and other countries, thereby posing a major economic dilemma.

Faced with this fact, the Syrian government has a right to attract Syrian funds from abroad — as well as non-Syrians — by competing in banking activity in the region. This could be done by pursuing smart economic and financial policy to attract capital and ensure confidence among those with capital following the major victories achieved by the army in the field, in an attempt to benefit from the conditions created by the economic situation in the region. However, this is not an easy task, as credit policy in Syria suffers from many points of weakness, with credit even less than deposits. Some banks have even turned down deposits because of the inability to put them to work and achieve profit due to the consequences of the war and the lack of clarity around the recently-planned banking facilities to encourage loans. Low-income loans alone account for 27 percent of total public bank credit.

Therefore the government needs to consider sound economic methods to create substantial change, not only in the structure of public banks, but in the mentality that governs the sector, and to secure an appropriate economic environment that serves competition in the banking sector at the regional level, in accordance with well-studied, gradual timelines.

Beginning to move toward attracting capital requires swift steps, including freeing the movement of capital and ensuring the stability of the exchange rate in exchange for sacrificing the independence of the Central Bank in setting the interest rates — though this does not mean independence in the literal sense of the word. Rather than setting them to serve public economic policy, they would be set to attract capital from neighboring countries — which has almost been achieved in terms of the interest rates as interest rates in neighboring countries are relatively high, ranging between nine and 14 percent. This would be accompanied by opening the door to loans in a serious and effective manner to investors and those who want to work in the country as economic health returns and growth rates are expected to increase investments after the war.

The government should also benefit from the experiences of banking free zones by establishing similar zones with the aim of attracting capital to the free zones at the lowest price possible with guarantees and exemptions set by the free zones, which act as assurance for the depositors.

To be clear, the idea is not to benefit from the economic weakness of neighboring countries, in particular Lebanon, but to learn the lessons taught by the region’s crises from an economic perspective in order to create competition in some economic sectors in the hope that Lebanon will pass through the crisis with the least possible losses.