Russia is continuing to use its veto at the UN Security Council, preventing an end to the violence and suffering of the Syrian people writes Jiroun. 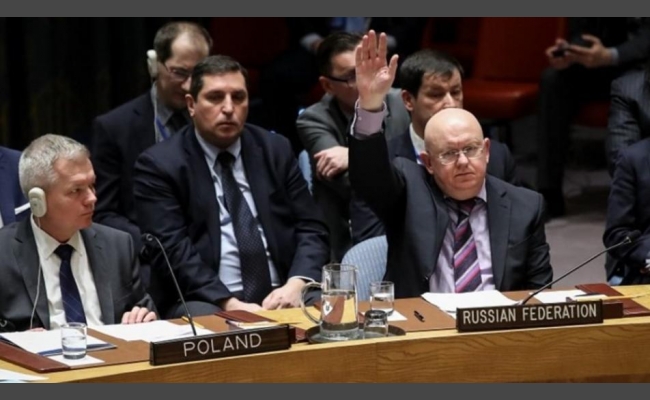 Russia and China used their thirteenth vetoes to prevent a Security Council resolution from being issued for an immediate ceasefire in Idleb governorate in northwestern Syria with the aim of avoiding an additional deterioration in an already disastrous situation in Idleb.

In a painful political deal, Russia and China have prevented the killing in Syria from coming to an end, despite the remaining Security Council members voting 12 times in favor of adopting the resolution. They have decided to continue supporting the continuation of wars overseas, far away from their own countries and people, in a confirmation that the deaths of human beings do not concern them—like any country governed by corrupt, totalitarian, indeed almost rogue, security regimes.

The word “veto” in its original Latin means “I forbid.” Its significance has evolved in international forums to mean “I object.” It is a power granted to the permanent member countries of the Security Council, which allows them to prevent the council from taking any decision that opposes their interests.

Russia has used its veto right in relation to Syria 13 times since the start of the revolution, to protect the Syrian regime, which has done all it can to impose and consolidate its power. Russia has blocked resolutions to stop the killing, destruction and disasters in Syria. China has joined Russia for more than half of these vetoes and has given its blessing to all the evils the Syrian regime has inflicted on the unfortunate people.

Russia and China are contributing to the continuing slaughter of Syrians and are rejecting an end to the violence and bloodshed, as well as humanitarian solutions. They are not taking into account the disastrous situation that Syrians have been and are enduring, and are proud of their vetoes, that could stop the killing in Syria, as if they have the right to overrule the Syrians themselves.

The two countries that are thousands of kilometers from Syria and have no unifying connection to them—not linguistic, cultural, historic, political, economic, national or religious—they want to dominate the Syrians and write their future for them, according to their whims and interests in an application of the saying that “the strong devour the weak.”

Since 2011, Russia has said, “I forbid” every year at least once, and in some years it has said “I forbid” four times to Syrians obtaining what they deserve in terms of a dignified, secure and free existence.