The recent attack on the Mezzeh military airbase reveals the interplay between nations and their influence in the region writes Al-Hayat. 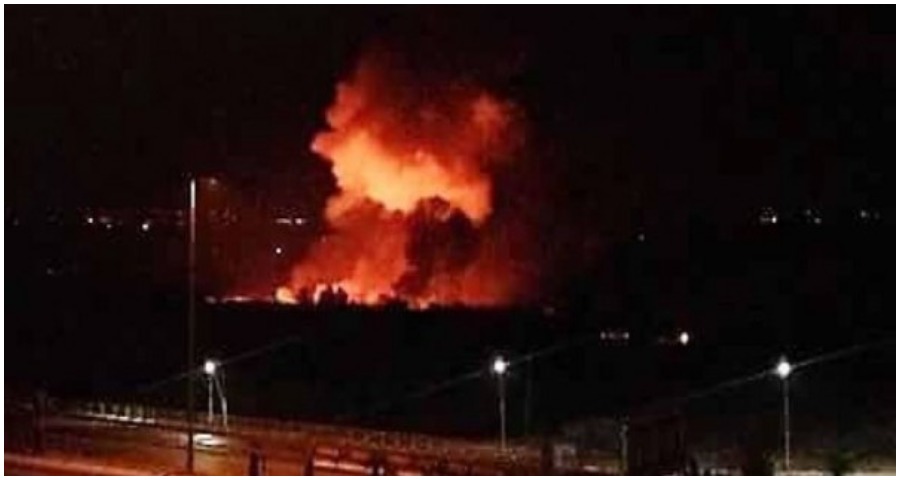 There has been a new Israeli raid on the Mezzeh military airbase in Damascus. These raids have become a compass which one can rely open to determine the map of international and regional influence within the Syrian regime. Moscow has moved Tehran away from the Israeli border. This step is more evidence. Tel Aviv demanded a complete Iranian withdrawal from all of Syria. Moscow did not reply. It seems that the raid yesterday was an indication of the truth of this information. According to the data, this scene reveals the strangest war one has seen.

Israel bombs and Tehran ignores the fact that they are the target. Moscow vows to control the borders, but it is not concerned with what is happening outside southern Syria. The Mezzeh airbase burns and the regime says that an electrical problem caused this enormous fire which was seen by most of Damascus’s residents. Meanwhile, the Secretary General of Hezbollah, Hassan Nasrallah, announces victory on a large fixed screen in Beirut, while his supporters celebrate with him, and his rivals publish images of the burning airbase.

In this war, anyone can claim to be victorious.

We must therefore look for the loser in the war. It is said that the Syrians are the losers, true, but making this statement has made us doubt it. Who are the Syrians who were “defeated”? The answer to this question appears impossible. Is it the half a million dead? They were not defeated just as they were of course not victorious. This is the same for the half a million disappeared and the millions of refugees from the destroyed cities and devastated countrysides.

If one cannot find a clear loser in this war, then we need to review the identity of the victor. In fact, Israel is the most pragmatic in this region. Israel does not feel victorious and it is also skeptical of all that has been accomplished and what Moscow has put on the table and called accomplishments. Yesterday’s raid on the Mezzeh airbase reveals that Tel Aviv is not convinced of what Moscow has accomplished. It also revealed that Tehran has not lived up to Moscow’s will to keep it away from the borders. Yesterday’s raid says much about this strange and mysterious war, and reveals chapters about the complicated relations linking its actors. Is anything stranger than this “electrical friction” which the people of Damascus witnessed? It is the real mask for all the rationales of the current conflict — with an enemy that bombs us and we deny it to ourselves and then they continue to bomb us. And what about the Tel Aviv-Moscow understanding, which should have achieved the first of its conditions? Israel has stopped bombing positions in southern Syria. The regime army there is safe, while its allies are targets in Damascus.

It is likely that the latest raid is a prelude to a new chapter of the war in Syria. As it was a sign of Tel Aviv and Washington’s conviction that Moscow will not be able to control Tehran. And this likelihood means that the fiery scene at the Mezzeh airbase will be an extension of the fires of the confrontations in Syria, and outside Syria.