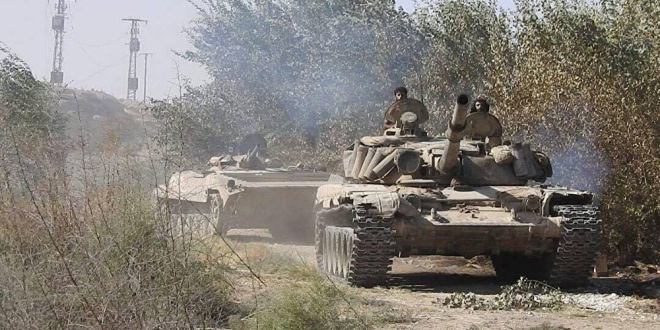 The Syrian army is still mobilizing its forces and heavy machinery on the northwestern Syrian front in preparation for a broad land operation that could begin soon and aims to eliminate al-Nusra Front and the Turkestani Islamic Party as well as the groups of Uighurs, Chechens and local factions connected to them.

The land forces which will participate in the expected operation are from different formations and divisions of the Syrian army. The terrorists will not be able to bear the bursting of rockets and artillery, which have reached the northern front. It is impossible to predict the extent of their severity, but it will be a force at least three times stronger than that which was seen in Daraa and eastern Ghouta.

Of course, the Syrian Air Force will serve in the battle and its MiG fighters will not leave the sky once the battle begins.

We will not forget the role played by allied and supporting forces, especially the Russian Air Force, which will actively enter the battle. It is believed that the strategic bombers and naval vessels in the Mediterranean will use smart missiles on terrorist groups.

It is likely that the towns under terrorist control will fall, similar to what occurred in Daraa and Quneitra. The factions of the so-called “Free Syrian Army” will take part in national reconciliations and hand over their weapons and their military equipment to the Syrian Army, while the terrorist groups such as al-Nusra Front and the Turkenstani Party and those tied to it will be given no quarter.

The Turkish taunts which have warned the Syrian Arab Army of the consequences of attacking terrorists in Idleb should recall the pockets of American supported terrorism in Ghouta and southern Syria, and should instead withdraw from their positions from inside Syria which they believe can protect the terrorists, because when the zero hour arrives, the shells will not distinguish between Turkish soldiers and terrorists.

The Syrian Army’s coming battle is drawing nigh and nothing remains but to finish some logistical preparations. When the battle begins, trust that it will not stop until it reaches the Syrian-Turkish border.