Negotiations were held between the Coalition's team on behalf of Washington, and that of the the regime's, which only says what Moscow wants 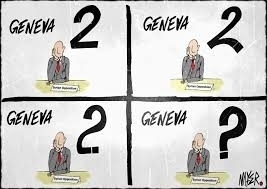 The outcome of Geneva 2 could be summarized in only one result: talks without a clear topic between the regime and a weak delegation representing the Syrian National Coalition. This delegation does not have any power or effect upon the reality in Syria other than what the U.S. enables it to do, including the limited and partial victories that were achieved in the last weeks by some armed groups against the Islamic State of Iraq and al-Sham (ISIS).

Considering this fact, negotiations were held between the Coalition's team on behalf of Washington, and that of the the regime's, which only says what Moscow wants.

Washington, in order to become a major player in the Syrian crisis indirectly, needs a strong opposition. Lately, it has been obvious that the U.S. does not have such a thing, given the huge weakness of the National Coalition's representation. This was because some groups—who have been classified by Washington as terrorist groups, such as the Jabhat al-Nusra and ISIS—control the battlefield in Syria. And some groups rejected being represented in the Coalition.

This is why Washington has urged support for some armed groups, encouraging them to fight ISIS, to emphasize that the main presence in the battlefield is held by the moderate non-terrorist groups, rebutting what the regime and Moscow say. Mainly, the U.S. did this to be a real participant in the Geneva 2 process and its talks. Additionally, the Coalition, supported by Washington, was able to stress the fact that it is against the terrorism carried out by the regime, according to its statements.

But Washington knows that these armed groups, with the Islamic Front in the lead, cannot be this strong opposition side that would enable Washington to participate in a balanced negotiations with Moscow, the Syrian regime’s guardian, because the collaboration between such groups is not tightly-knit. In addition to this, their willingness to sacrifice their fighters to control areas already dominated by groups such as ISIS is clearly uncertain.

And that’s not to mention that these battles would require them [such non-terrorist groups] to put their battles with the regime on hold, which would also prevent them from playing their main role as opposition to the regime.

Washington also knows that fighting ISIS will not be enough to support the fact that these groups are not extremists.

This explains why Washington hindered Geneva 2 in the past months, before it found itself compelled to hold this conference under the pressures of time and the international community, as well as the persistence of Russia. This explains Kerry's efforts to go back to the main point of disagreement in his speech in the Geneva 2 session in Montreux, calling on the Syrian president step down as a prerequisite to launching the political process, not as a result of it. This also explains Washington's declaration during the negotiations that the U.S. had handed over non-fatal supplies to non-terrorist armed groups. All these facts indicate that Washington was not prepared until now to go on with solving the Syrian crisis.

The American shortsightedness is not a new phenomenon, it has existed since the preparations for the Geneva 2 conference, or since before the Syrian political conflict evolved to become a crisis.

This shortsightedness was the result of the arrogance that has characterized the State Department's performance, which has assumed it has the ability to control the path of the conflict, regardless of the conflict's complexity or spread.

In its efforts to make the crisis, the State Department depended on some Syrian opposition figures who were unqualified to play a strong role in the path to a solution whenever they wanted to. According to this way of dealing, Mr. Robert Ford, the U.S. ambassador in Syria, resumed meeting with personalities whom he had not been in touch with since he left Syria in order to ask them to participate in the conference. But he failed, and he did not understand that those people do not consider opposing the regime to necessarily mean that they have to be on the side of the U.S. This occurred after Kerry's visit to Moscow last May and the announcement on the agreement to hold Geneva.

However, Washington is not the only one responsible for Geneva 2 and the failure of its negotiations to find a solution to the Syrian crisis. Moscow shares the same portion of responsibility since its aim for the conference was to promote the Syrian regime's survival through two theories, the first of which is "fighting terrorism first." [According to this], changing the regime might pave the way for terrorist attacks. The second [theory] is that "the disagreement about the nature of the regime and the selection of its leaders is a matter to be solved by the Syrian people, considering the current reality," which means that the regime will not stop suppressing and abusing Syrian people.

Therefore, Russia is not willing to participate in launching a political process that may end the crisis.

The Geneva 2 negotiations may lead to the arrival of some humanitarian aid for the displaced people inside the country or the besieged ones in a number of towns and neighborhoods, but the entry of such aid will not be permanent.

A cease-fire might be accomplished in some areas, but it will be a weak one and will not last for a long time. There might be also an exchange of dozens of the regime’s prisoners for people who have been kidnapped by the armed groups, but this will not change the existence of thousands of prisoners, nor will it stop the ongoing arrests.

Geneva 2 failed to solve the Syrian crisis. Regardless of the representative power of the Coalition's delegation and its abilities, settling for Syrian-Syrian negotiations and passing over the necessity of achieving harmony among a number of countries who are known to be the main players in the crisis—such as Iran and Saudi Arabia for example—will not achieve any real progress on the path to solving the Syrian crisis.

This dead end, in order to be by-passed, requires the presence of international and local players who are aware of the dreadful consequences of the Syrian crisis, especially regarding its effect inside and outside the region.

Those players should have the motivation and persistence to end this crisis, not to manage it.

Though there might be great difficulty in changing the views of those countries, there might at least be hope for developing a Syrian side that does not base its views upon a specific party, but rather from the Syrian homeland.

The opposition needs a side that does not reduce the Syrian crisis to merely an armed conflict that can have many shapes and intentions, and that is not distracted by debates and arguments that do not change anything in the present reality. This side would rather translate the weight of the vast majority of views and opinions into a political power that can change the present balance of powers.