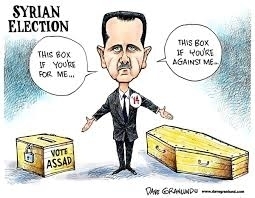 A board game played in smoky cafes from Beirut to Baghdad. Backgammon’s earliest ancestor is five thousand years old and was unearthed in southern Iraq. ‘Backgammon’ covers the state of play in the countries spanning the Fertile Crescent: Syria, Lebanon, Israel, Palestine, Jordan, and Iraq.

The Syrian government’s capture of Homs, the so-called ‘capital of the revolution,’ and Bashar Al-Assad’s inevitable victory in the upcoming presidential “election” appear to put the regime in a stronger position than ever before—but have these short-term victories come at a long-term cost?

Events in Homs last week raised questions about Assad’s future—questions that few have thought to ask so far. While Syrian state media wanted people to focus on the removal of the rubble, the reopening of the city’s shops, and the tourism minister’s bizarre claims that thousands would now flock to visit the city, deadly clashes broke out between two pro-Assad militia groups, the National Defense Forces and the Syrian Social Nationalist Party. While the story barely registered with the international press, who’ve grown more accustomed to reporting on the infighting that has come to characterize the opposition, it is worth exploring for the light it sheds on the possible future direction of the country.

While Assad’s father was able to fully restore his full authority across the country following the crushing of the uprising in Hama in 1982, there is no guarantee that Bashar will be able to put the country back together again. Indeed, the fighting in Homs may be a sign of things to come, and the consequence of Assad’s ‘outsourcing’ of the defense of his regime to groups from both inside the country and across the region. These famously include between 4,000–5,000 members of Hezbollah, in addition to Iraqi militiamen and senior commanders from the elite Quds Force of Iran’s Islamic Revolutionary Guard Corps (IRGC). The Syrian regime has also sought to empower informal—and notorious—local militias known as Shabiha (“ghosts”), as well as 60,000 members of the paramilitary ‘National Defense Force,’ whose role in a future Syria is debatable, to say the least.

The traditional authoritarian structures of Ba’ath Party power have endured the three years of conflict at massive cost, with some estimates saying that the previous thirty years of social and economic progress have been reversed in a tenth of that time. This will have a host of ramifications that undermine the meta-narrative of regime success. You only have to look to Syria’s neighbors to the east (the Sons of Iraq) and west (Hezbollah and others) to see the inherent difficulties of disbanding or reintegrating armed groups into national structures with clear lines of command and control.

Although the fog of war whirls at its thickest around the role of the Shabiha, who’ve been linked to some of the bloodiest episodes of the conflict, some reports suggest that they have been armed and paid 130 US dollars a day for cracking down on protesters. The obvious potential for blowback in surrendering sovereignty to such groups will perhaps only become apparent if the regime is unable to either pay them or chooses to try and disarm them as part of a policy of restoring the structures of power that existed prior to the uprising.

Perhaps even harder to predict is the continued evolution and strategic direction of Hezbollah, whose efficiency in disrupting opposition supply lines has been a key part of the regime’s recent counteroffensives. The group’s modus vivendi, previously defined by its conflict against Israel and nationalist credentials inside Lebanon, has changed significantly after it choose to go ‘all in’ to ensure Assad’s survival. A recent article on the group described how the conflict in Syria has given it a “new sense of purpose,” and it will be interesting to see if they adopt a more visible and permanent presence inside a country whose borders have always been a convenient fiction in some places.

Meanwhile, Iran, whose financial, technical and practical support to Assad should not be underestimated, may come to see him as a dependent proxy rather than an independent player in the region’s treacherous power struggles.

It was once said that Assad would be happy to see the country destroyed if he could remain in power. While the skeletal buildings of Homs and Aleppo are the most vivid testimony to the destruction of the Syrian state, its power structures have also endured significant change born of the regime’s desperation to retain a modicum of power. Barring any significant external intervention from the West or new levels of support to the opposition, the regime may continue to extend its control across the country. Still, the internal cohesion of this control may be neither durable nor predictable, and may yet come to define the Syria that finally emerges from the conflict that began in 2011.

All views expressed in this blog post are those of the author and do not necessarily represent the views of, and should not be attributed to, The Majalla or Asharq Al-Awsat.