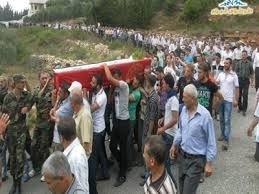 For over three and a half years, loyalists to the Syrian regime in general, and the inhabitants of the coastal areas of Syria in particular, have continued to pay the highest cost of the mad war—a war initiated by the regime in response to the fair demands of the Syrian people since the very beginning of the protests.

The graves of their sons are dug in the orchards, under the shadows of lime trees, and mothers’ tears continually water the flowers planted around those graves. After each battle, and each new convoy of victims, the regime has used the media apparatus—again and again—  to propagate the idea that ultimate victory is at their doorstep, and to support illusions of victory in a cosmic war conducted against it. However, months and years have passed, and children are still waiting for their fathers’ victorious return. Instead, they only receive their fathers’ remains. The young people of the coast continue plunging in, sometimes forced, but in most cases convinced of the heroic role the regime has assigned to them in saving their homeland with their own and their country fellows’ blood.

In fact, the regime is continuing its success in turning Syria into a hotbed for all kinds of the most powerful criminals and killers from among supporters of radical Islam, who found, in the collapse of Syria, a fertile environment to achieve their old-but-rekindled dream of establishing their Islamic state. This scene—replayed for three whole years—made it imperative for the Syrian regime to continue to claim that it is fighting for the continuation of a united Syria. At the same time, the regime continues its propaganda about the conspiracy against Syria, because of the country’s attitude in support of the rights of the Palestinian people. And both the regime and the radical terrorist groups added yet another reason for the continuation of Syrians’ bleeding: [the existence of] a sectarian battle waged by the extremist radical Islamic forces.

Despite increasing losses at all levels, the above-mentioned factors made the coastal Alawites believe the regime’s tale to a significant extent.

The blind belief in the regime’s tales held by pro-regime followers suddenly cracked and found itself discredited. Moreover, voicing direct criticism and even accusations of betrayal, the Alawites themselves began to directly address the head of the regime himself. This is not an illusion, it is the bare truth. This became very clear, especially after the successive defeats suffered by the regime, and the humiliating scenes of captured soldiers herded to slaughter in Raqqa. Yes, the conditions of credibility, acceptance, and silence collapsed—and social media pages that had considered Bashar al-Assad to be a legendary leader are now full of words and expressions directly accusing the regime’s leadership of betraying the blood of Syrian soldiers. They accused this leadership of offering up the sons of loyalists as a bargain to Islamic extremist groups such as the Islamic State.

The residents of coastal areas weren’t convinced that what happened was the result of battles between the two fighting parties. They simply considered this matter a betrayal at the level of leadership, the conclusion of an already agreed-upon bargain between the regime and IS —or as an attempt by the regime to convince the United States, a hoped-for ally, of the necessity of the regime’s participation in the war against IS. The criticisms exceeded what was permitted by the regime, but the matter shifted from merely posts on web pages to demands that the defense minister resign, as many considered him responsible for the situation. The demand was intensified in the form of a demonstration in Damascus, which was then followed by an internet campaign led by a young man who had typically written in favor the regime.  He demanded that the fate of captured soldiers be revealed, and for explanations about what exactly happened at the Tabqa military airbase.

The regime had believed the areas which supported it would never oppose it. In order to confront the change in mood, the regime adopted two methods to suppress the rebellion: First, the young man who started the campaign on the internet, Mudar Hassan Khadoor, was arrested and taken to an unknown place by the Damascus branch of the Air Force Intelligence. Second, the regime sent delegates to the governorate of Lattakia to participate in the ceremonies of mourning alongside affected families. But the anger was deep, and impossible to control with such maneuvers. In one case, the parents of an officer killed in Raqqa expelled the regime’s representative, Youssef Al-Ahmad, from the condolence tent as he urged them to continue to support the regime and send their sons to join the army. The local attendees told the representative, “Yes, we will send our sons, but only after seeing the sons of officials—like you—in front of them.

Recently, new invitations have appeared in the coastal areas calling upon young people not to enter the army’s service outside the areas of the coast, and to limit their commitment to the defense of their own areas against the radical extremist groups. It is worth mentioning that these [extremist] groups have been in the mountains of Lattakia for more than two years. The regime did not make any serious military efforts to get rid of them—even after these groups invaded several Alawite villages Battle of Ayesha, during which the groups’ militants committed sectarian massacres, resulting in the deaths of dozens of children, the elderly, and women, and the capture of more than 150 people. Despite the presence of fighting within areas considered to be regime-controlled, the regime’s response has been limited to retaking the lost areas without any attempt to get rid of the extremist fighters.

This fact led to the conviction among the coastal Alawites that the regime wants to keep these radical groups in the area, using them as a sword hanging over the necks of locals in case they decide to rise up against it.

When communicating with the people of coastal areas, and asking why many of them continue to fight alongside the regime, most answer that it is because the armed Islamic opposition is hunting for their heads. They say the Islamic fighters want to rape their wives just because they are Alawites. They also say it is because there is no place for them to escape the regime’s anger, whose brutality they already experienced during the elder Assad's rule, when hundreds of sons of the regime’s opponents were detained for dozens of years, just because they were members of leftist parties opposed to dictatorial rule. Another reason, [they give, is] it is due to their limited resources, which do not allow them to do without the jobs the government provides. They also fear subjecting their families to hunger, especially with the prohibitively high prices that grip their areas, and halt of the sale of their products—such as citrus—to other parts of Syria. This situation has made the Alawites hostages to the regime as a result of fear of hunger, fear of the regime itself, and fear of armed radical Islamic groups.

Nevertheless, large cracks have started to appear in the areas the regime considers its greatest strongholds. The upcoming days may bring surprises long-awaited by many Syrians.