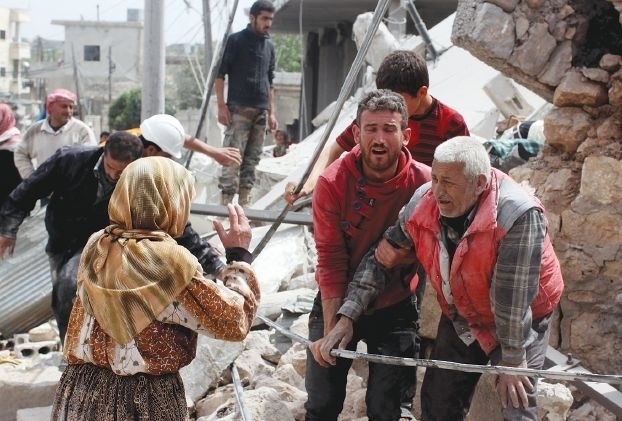 Since Idleb and Jisr al-Shughour fell into the hands of the armed opposition, a certain discourse has started circulating among regime supporters. This discourse explained that what happened was the result of the regime forces’ dispersal in distant areas, and of the abandonment of regime supporters’ most important geographical and social areas, like the coast and the coastal mountains. This rhetoric regarded fighting in peripheral areas like Deir-ez-Zor and the Aleppo countryside as a waste of military resources and efforts, since these areas are beyond retrieving.

People who employ this discourse demand that all regime forces relocate to the areas between Damascus and Lattakia, including Homs and Hama. They believe that this would protect the Alawite community and the majority of the other regime supporters from the other sects. These areas, according to this discourse, are large and include the most important cities and geographical areas. Controlling these areas would allow the regime to impose its own political and military conditions on any prospective settlement. No one could imagine Syria without these areas, and it has been very difficult for the opposition to take over these areas, since the community there rejects the armed opposition unlike other areas like Idleb and Jisr al-Shughur, where they have total support.

This discourse is based on three imprecise theories.

First, it supposes that all opposition forces – whatever their goals and ideological and political background – would accept a power-sharing arrangement with the regime, and that all opposition forces are trying to gain control over conservative Sunni communities. This assumption is imprecise, since it does not distinguish between military groups such as the FSA and jihadist groups such as ISIS and the Nusra Front. The FSA and other similar military and political forces, for example, might find that sharing military influence with the regime may push toward a certain political solution, and that there is therefore no need to conquer pro-regime areas. This does not apply to the jihadist groups. These fighters’ painful memories of how inhabitants of pro-regime areas have supported the terrible bombardment of their own regions reinforces this idea, whatever the veracity of this notion.

Second, the idea of contracting to the Syrian coast is based on the assumption that this region is socially cohesive, which is not even the case in Tartous and Lattakia, the center of gravity for regime support. The proportion of Sunnis and Alawites in these two provinces is almost equal, especially since hundreds of thousands have moved there from conflict areas. There are also around 10 million Sunnis in Damascus, Homs and Hama, making regime supporters in these areas – including Sunni regime supporters – a minority. Conflict areas like the Hama countryside, and western Homs and Ghouta, which were attacked violently by the regime supporters, make the Syrian coast internally flammable.

The last premise concerns the military forces’ ability to protect regime supporters in the areas the assumed contraction will exclude. At the best, there are around 100,000 fighters fighting for Assad’s forces, including paramilitary shabeeha. This number is not sufficient to protect a front as large as the 600 kilometer front between northern and southern Syria, especially since they would be defending themselves without air support, since all of the regional countries that support the Syrian revolution would impose a no-fly zone in the remaining areas [if government forces withdrew].

Is this a dead end for Assad supporters? Must they keep fighting the rebels? Does the community that supports Assad have to pay for what has happened over the past four years?

Of course not. This assumption is too tragic, and means that the conflict will never end. This assumption only exists because Assad’s supporters believe that he and his people will remain in power. If they changed their minds and admitted that Assad and his people are the central cause of this tragic situation, then the door would be opened to forming a minimum national consensus, in which the Syrian state would protect regime supporters from revenge, protect others from radical religious forces, and protect all Syrians from uncontrolled militias.