International players urge Syrian opposition to attend talks as debate continues around the composition of the opposition's delegation, goodwill measures, and the negotiation agenda ahead of Friday's peace talks in Geneva 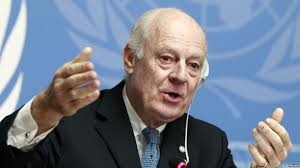 International and regional efforts picked up Wednesday to clear, or barter with, three obstacles ahead of the indirect negotiations between the Syrian government and opposition in Geneva on Friday; the composition of the opposition delegation, goodwill measures, and the agenda. Alongside this, efforts are being made to give assurances to the opposition’s High Committee for Negotiations and respond to its questions — the Committee was surprised by the “rush” to hold negotiations “before providing conditions for its success” — while reassuring the Kurdish Democratic Union Party, headed by Saleh Muslim, that it will enter talks at a later stage, and Russian reports that UN envoy Staffan de Mistura has invited Syrian Foreign Minister Walid al-Muallem to head the Syrian government delegation.

After the High Committee’s general coordinator, Riyad Hijab, sent a message to UN Secretary-General Ban Ki-moon earlier this week specifying the basis on which the opposition could participate in the negotiations, he sent a letter of reply to de Mistura yesterday, followed by a phone call. According to reports, Hijab urged “the international community to fulfill its obligations toward the Syrian people,” saying that he asked de Mistura for “some clarification, in light of the completion of the measures that have been hastily prepared in international hallways and without taking into consideration some important arrangements which cannot be overlooked, especially the role of the UN in implementing articles 12 and 13 of Security Council resolution 2254.”

Hijab noted that of particular importance was, “ending the siege of blockaded regions, cities and towns, delivering humanitarian aid to all those in need, releasing prisoners and prisoners of conscience, stopping any attacks directed against civilians and civilian targets, and ending bombardment with indiscriminate weapons, including artillery and airstrikes.”

“The international community must be clear and decisive in this issue. It is otherwise impossible to hold serious talks in light of the war crimes carried out by foreign parties against the Syrians,” he added.

Hijab was informed by his interlocutor that the negotiations will be held “without preconditions”, in accordance with the Russian-American understanding, the International Syria Support Group’s statements in Vienna, and resolution 2254, and that it will not be possible to place these issues on the negotiating table with the government delegation, the UN envoy, and the sponsoring nations. Hijab stressed that these demands are “not preconditions, indeed the international resolutions called for immediate compliance with them… the real obstacle preventing the implementation of these resolutions is those who are imposing preconditions for implementing them and insisting on linking ending the Syrian people’s suffering with an advance in the political track through the negotiating process.”

Responding to the statements made by de Mistura and Western officials that it would be possible to “test the intentions” of the Syrian government in the negotiations by proposing the implementation of humanitarian issues, Hijab said that their intentions were made clear at the second Geneva peace talks, when negotiations were held under the previous UN envoy Lakhdar Brahimi and “the regime refused to discuss the formation of a transitional governing authority.”

At the beginning of 2013, the government delegation in Geneva II had focused on “fighting terrorism”, contrasted with the opposition’s focus on “forming a transitional governing body”. Brahimi’s efforts to hold parallel talks around the two issues were unsuccessful, something de Mistura is subsequently trying to test by repeating the principle of “parallel tracks” in the upcoming negotiations, which are expected to last six months.

The High Committee rejected demands to change some members of their negotiating delegation, especially the representative of the Army of Islam, Mohammed Mustafa Alloush. Hijab said: “The ongoing dispute over the invitations and the people participating arises from a response to the attempts of the regime and its allies to obstruct the negotiating process by questioning the trustworthiness of the opposition delegation, insisting on classifying them as terrorists, intervening in the formation of its negotiating delegation, and trying to pass names that provoke controversy.”

Russia demanded that the positions of chief negotiator Alloush and defected general Assad al-Zubi be changed and civilian personalities named, given that representatives of militant factions should be invited only when the discussion of political questions moves to the discussion of military affairs, in addition to the fact that Moscow considers members of the Army of Islam and Ahrar al-Sham Islamic Movement to represent “terrorist organizations”. The possibility has been previously circulated that Alloush withdraws voluntarily, and be included in a later stage during the discussion of military issues.

Upon the resumption of talks in Riyadh this week, the High Committee began preparations for negotiations — by contacting members and their regional allies — after “humanitarian conditions” were provided and a negotiations program agreed upon. It called for “discussing the establishment of a fully-empowered transitional governing body, adhering to Syria’s territorial integrity, while preserving the institutions of the state and reforming and restructuring security and military institutions, rejecting terrorism in all its forms, and establishing a pluralistic regime that represents the full spectrum of the Syrian people, without there being a place for [President] Bashar al-Assad, his regime’s military leadership, or prominent figures in that or in any future political arrangements.” This conformed with the statements of the opposition conference in Riyadh on December 9-10.

It appeared the High Committee for Negotiations was not convinced by the explanations given by the American side through Secretary of State John Kerry during his meeting with Hijab in the Saudi capital last Saturday. In his Riyadh meetings, Hijab said: “There has been a regression in the positions of some of the friendly countries, which have abandoned their statements that Bashar [Assad] has lost legitimacy, and given up calls for him to step down immediately. Today they have begun to talk about the possibility of achieving this in the long term and making the implementation of international resolutions conditional on the agreement of the regime according to the principle of ‘mutual consent,’ ignoring the fact that the regime refuses to discuss this issue on principle and does not accept putting it on the negotiating agenda.”

According to sources present at the High Committee meeting, held with the attendance of Western envoys, representatives of the 10 military factions were “the ones who most did not want to go without achieving something on the humanitarian side,” an issue which Hijab stressed in his messages to the UN secretary-general and de Mistura, where he called for “ending the siege on the blockaded regions, cities and towns, delivering humanitarian aid to all those in need, releasing all prisoners, prisoners of conscious, and prisoners according to exceptional laws or not in harmony with the principles of respect for human rights, especially women and children, stopping any attacks directed against civilians or civilian targets, halting bombardment with indiscriminate weapons, including artillery and air strikes, and stopping forced displacement and demographic change.”

It seemed Wednesday that the three obstacles still hindered the success of holding the Geneva talks. There were indications that a solution was approaching around the “knot” of the representation of the Kurds as Russian Deputy Foreign Minister Gennadiy Gatilov said that the Kurdish Democratic Union Party could participate at a later stage.

Turkey and Syrian opposition figures intimated they would boycott the talks if the head of the Democratic Union Party was to participate, while his political ally Haytham Manaa said he would not join the talks if Saleh Muslim was not invited. Manaa was among 10 people invited in a “consultant” capacity, with the exception of all Kurdish leaders who were included in the “Russian list.” A number of those invited arrived to Lausanne in preparation for consultations with de Mistura, while independent opposition figure Jihad Makdissi apologized for not accepting the invitation of the international envoy.