“Progress” in Damascus’ position following its acceptance of a “political transition” with its talk of forming an “expanded government”, in contrast to the HNC's rigidity in clinging to the formation of a “transitional body” as the starting point for a political transition 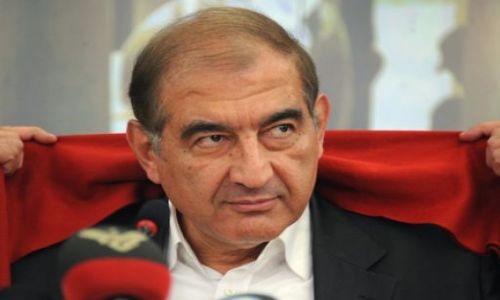 The opposition High Negotiations Committee came under pressure from some of its allies and rivals to stay on the negotiating track after its general coordinator Riyad Hijab announced their gradual withdrawal from Geneva, while the international envoy Staffan de Mistura made efforts to keep the wheel of the negotiations spinning and give the impression that they can advance with other opposition members and “those who attend.” There are efforts by the Syrian government delegation to test a proposal to form an “expanded government” and discuss the international envoy’s proposal to appoint three or five vice presidents for President Bashar al-Assad, each with a defined specialty. Meanwhile, the choice of forming a joint military council remains in the Russian defense ministry’s files, to be presented at the appropriate moment.

Hijab had announced the day before yesterday that they would suspend participation in the talks in protest over a series of developments, including the lack of progress in humanitarian affairs, the continuation of the regime’s sieges of a number of areas, violations of the truce by the regime, and Iran sending more volunteers to fight alongside the regime forces.

“We asked de Mistura for a timetable to implement a political transition, and the regime is procrastinating. It does not want a political solution because it knows that will be its end,” Hijab said, pointing out that the Committee had not received a response to eight questions it presented in a document to the United Nations team about the political transition, a timetable, and the formation of a transitional body. However, the Committee decided to keep a legal delegation to join technical discussions, not held in the United Nations headquarters, with an international expert who was among those who drafted the “transitional body” article in the Geneva declaration issued in mid-2012.

De Mistura, for his part, intended to hold two meetings before he departed for Rome the day before yesterday for personal reasons: First, with the Syrian women’s committee, and second with the two groups from the Moscow and Cairo conferences in the opposition and the “Hemeimeem group,” which was formed after a visit to the military base in Lattakia in western Syria. The international envoy’s deputy, Ramzy Ezzeldin Ramzy, meanwhile met the Syrian government delegation yesterday.

The symbolic message that de Mistura wanted to give was that the negotiations are ongoing, and he expressed this in his meetings and phone conversations. He was quoted as saying that ambassador Bashar al-Jaafari says the fate of Syrian President Bashar al-Assad is a “red line” and that he is not authorized to discuss drafting a new constitution or new elections. The “one issue” he is authorized to discuss is the formation of “an expanded government with the participation of regime loyalists, opposition members and independents.” He relied on President Assad’s words in an interview with Russian media to explain what is meant by “expanded government” in the document which Jaafari presented to de Mistura in response to the statement of the 12 principles that the international envoy announced at the end of the last negotiating round on March 24.

De Mistura noted, according to reports by Syrian figures, that there has been “progress” in Damascus’ position since it had begun to accept “a political transition” with its talk of forming an “expanded government” in accordance with the current constitution of the year 2012, and then drafting a new constitution within a framework of the Syrian government’s understanding of the first article in the political transition in Resolution 2254 relating to the formation of a “new government.”

In contrast, de Mistura pointed to the Committee’s rigidity in clinging to the formation of a “transitional body” as the starting point for a political transition. For that reason, he insisted on proceeding in negotiations and consultations, and “thanked” those who proposed the idea of appointing Assad vice presidents. Meanwhile a discussion was held between one of the international envoy’s advisers and opposition members about this idea. It turns out that one of the originators of this idea, which de Mistura said was not his personal proposal, was the president of the Popular Front for Change and Liberation, Qadri Jamil, who had begun to speak about it in his closed sessions several months ago through the appointment of five vice presidents with specific powers, in something resembling a presidential council. This was believed to be in “harmony” with Vitaly Naumkin, the Russian orientalist, who has become part of de Mistura’s team circulating this idea in parallel with it being raised in the Russian Foreign Ministry from Foreign Minister Sergey Lavrov and his deputy Mikhail Bogdanov.

Some of the opposition found in this proposal a “solution” to the blockage between Damascus’ position of refusing any departure from the constitutional framework and the Committee’s insistence on forming a transitional body without any role for Assad. After Russia, in its negotiations with Washington and background negotiations with legal experts, had approached the idea of drafting a constitutional declaration in parallel with forming a “new government,” it began to incline toward the idea of a solution in accordance with the current constitution.

A point was raised by some of the interlocutors: If Assad is appointed three or five vice presidents, then “the problem is that he can depose them at any time he wants, leaving the political transition prisoner to the decision of the Syrian president.” But one of the international experts found “a solution, as it was proposed in Geneva that the decision to appoint vice presidents would be supported by an international resolution according to Chapter VII, which will include the Syrian settlement as a whole.”

The “Cairo group”, which includes eight figures including Jamal Suleiman and Jihad Makdissi, who met de Mistura despite their keenness not to tear apart the opposition Committee, tied the proposal for five deputies for the Syrian president to a proposal to form five councils, which would be “a transitional national council, a high judicial council, a transitional phase government with full executive powers according to the Geneva declaration, a national military council, and a high authority for justice and equity.” But the difference, according to the discussions, is that the “Moscow group” thinks that their presidential proposal “preserves the structure of the state and its institutions” while the other proposal includes “building a new regime from new institutions.”

These discussions were met with concern from the pillars of the Committee because of their conviction that it indicated Russia’s desire to “dissolve” the opposition and split the ranks of the negotiating Committee, amid talk about different viewpoints within the Committee regarding the decision to withdraw from the talks. Jaafari said after his symbolic meeting yesterday: “If they (in the negotiating Committee) want to boycott, they can boycott. It’s not a big problem for us because they are not the only representatives of the Syrian opposition.”

The Russian envoy in Geneva Alexey Borodavkin said the Committee’s decision to withdraw was a “mistake” because any political settlement will not be attained except through negotiation. He added: “We have received information now that the constructive section of the Committee delegation does not agree with this position. This is what was expected. The reasonable opposition members must not get caught behind the extremists,” indicating that “the reconciliation center in Hemeimeem includes 60 opposition groups.” Lavrov said in a press conference with his French counterpart Jean-Marc Ayrault that “the negotiations are not frozen. Apart from the group (the High Negotiations Committee) there are the government delegation and delegations of groups gathered in Moscow, Cairo and Astana and the Hemeimeem group participating in the talks.” He criticized the “volatile” behavior of the High Committee delegation.

But, remarkably, the opposition’s allies, Washington, Ankara and Paris, announced a similar position. Ayrault called on the Syrian opposition to return to Geneva, saying: “We will do all that it is possible to do to save this peace process,” after Washington said that it “understands” the Committee’s position but the choice to negotiate is better. Meanwhile the Turkish Foreign Minister Mevlut Cavusoglu urged the opposition not to withdraw. According to someone familiar with the Russian position, there are three possibilities: The first is an understanding between the government and Committee delegations in Geneva. The second is an understanding between the government and a select list of opposition members and “new opposition.” The third is that an international resolution about an American-Russian understanding is issued to the Syrians. From here comes Damascus’ proposal to form an “expanded government” which Moscow and Tehran may consider a “gateway to a solution” while Hijab considers it “empty talk which would reproduce the regime.”

There also remains the option of forming a joint military council from the Syrian army and opposition members, a paper in reserve in the files of the Russian Defense Ministry, which has begun to play a bigger role in the Syrian issue at the expense of the Foreign Ministry. The role of the Hemeimeem base in Lattakia has increased at the expense of the diplomatic role of the Russian embassy in the Mazaraa district of Damascus, amid reports of communications of the Russian army with leaders and figures.

It seems that with regard to the allies of the regime and the opposition, the Geneva option is still the favorite amid the American-Russian desire to “prevent failure.” When Lavrov was asked about the extent of Assad’s ability to “win the war,” he said “no one can win the war.”