After the explosion of the presidential grandiosity and the collapse of other influential politicians in the ruling party, Turkey is now ruled by an obsession with mobilizing against an enemy which is more imaginary than real 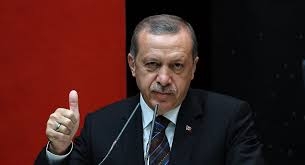 It may be understood that Recep Tayyip Erdogan receives Sunni sympathy whose source is the sense of sectarian vulnerability across the border. And it is of course understood that he receives Syrian solidarity as in one of his faces he protests against the world’s silence around the Syrian tragedy. It is a solidarity which is increasingly justified, for practical reasons and reasons related to life, among Syrians who have fled Assad to Turkey, and this is not a trivial detail.

Indeed Erdogan is being raised to the rank of the long-awaited historic leader, which goes against the very nature of Erdogan, as a phenomenon which is not drawn from confidence but slightly less.

The confidence is not a personal accusation. This is because, in principle, the populist style of leaders is one of the least fixed forms of leadership. It is a standard not limited by other populist standards. It is a pleasure to find the enemy and strengthen the hostility. Indeed, the enemy can turn into a friend, and vice versa, for simple reasons. If it is true that Juan Peron of Argentina is the founder of modern populism after the Second World War, that is, after fascism, and it is true that the Peronist track swings constantly between left and right, between the Western and Eastern camps. If you add in the unenviable position of Erdogan’s Turkey in the surrounding balance of powers, some of it of Erdogan’s own making, we can expect an increase in the rate of volatility to professionalism.

But if the excessive volatility is an essential part of populism, then Erdoganism, before the coup attempt and especially after it, offers this school some important lessons. After the explosion of the presidential grandiosity and the collapse of other influential politicians in the ruling party, Turkey is now ruled by an obsession with mobilizing against an enemy which is more imaginary than real. Abroad, there is “the West,” up to Sweden, where Turks have begun to warn about rapes. Domestically, there is Fethullah Gulen. It may have been that Roger Owen was right in comparing Gamal Abdel Nasser’s use of the enemy represented by the Muslim Brotherhood and Erdogan’s use of Gulen. But it seems that Erdogan intends for the environment which he has mobilized to be governed by the mobilization. It has gone to the extent of reviving the myth of the Donmeh, the sect who followed Sabbatai Zevi in the 17th century, and has been a source of conspiratorial interpretation for half Turkey’s modern history!

The most dangerous thing, in light of the atrophy of the economic success of the first half of the Justice and Development Party era, populism is being strengthened through disrupting the leadership positions in civil society and public and private institutions, in education, journalism and the judiciary. Here, under the pretext of fighting Gulen, the foundations of dictatorship are being laid in society, with the dismissal and arrest of thousands of high and mid-level staff. This social “limbering” has been known previously in Turkey in 1942, under the pretext of fear about involvement in the Second World War and the preparedness for that. At that time, under Ismet Inonu, a “wealth tax” was introduced, which in practice was a tax on non-Muslim Turkish capital, whether Jewish, Armenian or Greek, completed with a terrible decline in the number of these minorities amid a nationalist mobilization which was sharply religiously inflamed. Soon the result was the beginning of a populist sweep in the name of the interests of the countryside, expressed in the 1950 elections: The Democrat Party, founded by the Islamic passion of Adnan Menderes and the far-right Kemalism of Celal Beyar, claimed the harvest of this political and social waste that the mobilization led to. They won 408 seats out of 487 in parliament (Erdogan would later recall that his early politicization began with watching his father crying for Menderes when the army executed him 10 years later).

The case is that what most ensures populism is the ability of the leader to disable social positions and institutions, or make them into forms without substance, and further the polarization of the people with simple arguments of a tactical nature. The ones who make these arguments are not concerned so much with convincing people so much as they are with the simple and direct fact of charismatic leadership and revealing social hotbeds to gather them. This loaded mobilization is at the head of the masses but without professional or class organization. The inspirational leader can afford to strike left and right, and so he chooses the enemy and friend according to his discretion, amid thunderous applause from his dazzled fans.

Like this, and compared with the shift toward Russia and Israel, and the West and the Kurds, many doubt that Turkey will remain the same in its behavior toward Syria, despite the serious and basic drawbacks of that. The positions that have appeared recently look like a rapprochement with Iran and Russia around the Kurds, and so it is no secret that Assad has accompanied them enthusiastically by pouring its fire by land and air.