Confusion heads political expectations worldwide, with cautious optimism and wishful thinking being shared between the current US administration, Russia, Iran and Assad, as concrete details around what a Trump presidency would look like remain unclear 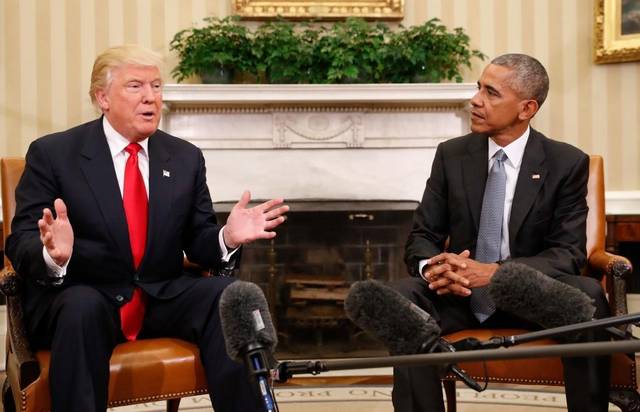 Obama said he doesn’t expect Trump to mirror his own strategy on Russia, and hopes his successor will work constructively with the superpower where appropriate, but he also prodded Trump to take a tougher approach towards Russia, urging the president-elect to “stand up” to Moscow when it violates global norms.

Even more, Obama urged Trump not to strike deals that could hamper U.S. interests with Russia’s Vladimir Putin – “My hope is that he does not simply take a realpolitik approach,” Obama said. He said he hopes the businessman won’t cut deals with Russia if it hurts other countries or “just do whatever is convenient at the time.”

Despite Obama’s consultations, a double standard is loud and clear — the Obama administration kept to a strategic minimum and inactive policy, in spite of Russia’s brutal crimes in Syria and Ukraine.

More so, Obama adds that he is ‘cautiously optimistic’ about Trump’s presidency, and on his hopes of him coming to be a serious leader when transition of power is completed.

As for Iran, the traditional escalatory policy has been in action, riling up the region on one hand, and handing over toned down leaks to Western media on the other.

Iran previously went as far as threatening maximum retaliation should Trump roll back from the nuclear deal — yet Iranian politicians have assured Western media that Supreme Leader Khamenei is not necessarily put off by a Trump presidency, and that Iran is more than willing to work with the president-elect.

Trump’s stances on Syria, such as prioritizing the fight against ISIS instead of political settlement driven by Iran’s key ally Assad leaving power added to his willingness to cooperate with Russia’s Putin have all been positive tempos played for the cleric-led regime.

Trump’s campaign talk against Iran’s regional antagonist, the Kingdom of Saudi Arabia, which is a natural and trusted U.S. ally, has also added to Tehran’s enthusiasm for a Trump presidency.

Perplexingly, Iran selectively overlooks Trump’s campaign talk against the nuclear deal – yet projects an outlook on a Trump presidency coming through with campaigned anti-Saudi policy, and political idleness in Syria.

As for Syria’s senseless despot Assad, he says Trump’s election is vigilantly watched, given that he hasn’t occupied a political post in the past.

Echoing Russian and Iran remarks, Assad says that he and Trump would make natural allies if the latter combats terrorism.

The matter at question is how a Trump presidency can find an ally in Iran and Assad, after all of Trump’s criticism against the Tehran regime.

Slimming down the chances of the future presidency tipping towards an Iran alliance, Trump’s administration is expected to include former New York City Mayor Rudy Giuliani, known for extraordinary anti-Iran sentiment, as Secretary of State, and Republican John R. Bolton as a U.N. ambassador. Bolton frequently voices the need for a swift regime change in Iran.

Confusion heads political expectations worldwide, with cautious optimism and wishful thinking being shared between Obama, Iran and Assad. Nothing of a Trump presidency has been cleared out yet, not even on matters concerning the prospective administration.

Even Putin, being the one most expectant of a Trump presidency, says that restoring U.S.-Russian relations will have to tread a long and difficult road.