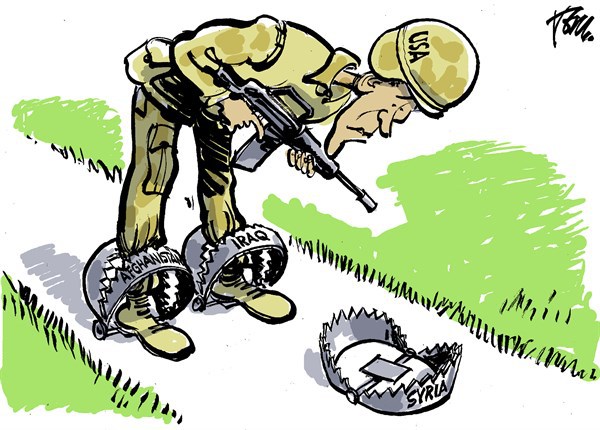 While the "Riviera Hotel Conference" was launching what was later called the "Beirut Platform," which would declare Chemical Assad's fate no longer an issue for international deliberation as well as "the end of the war against the regime" according to Louay Hussein, the regime was returning Hafez Assad's statue to the city of Hama on the 35th anniversary of the city's destruction by Hafez Assad.

This "Hezbollah Platform" attempts to block the opposition delegation from attending the Geneva negotiations scheduled for February 20. At the same time, it seeks to aid the great campaign of despair, launched after the fall of Aleppo to convince people of the end of the revolution and the regime’s reestablishment of control over Syria.

The reinstallation of Hafez Assad’s statue in the city of Hama reveals the kind of future awaiting the Syrians if the ruling gang was to regain control: a replica of Assad's experience in the wake of his devastating victory in Hama in 1982 by turning the disaster that the city underwent into the means of perpetual terrorization of the Syrian people. Contrary to the common legal principle, in Syria, every Syrian is accused until proven innocent. No Syrian is safe unless the regime and its affiliated institutions and thugs say so.

Is this possible? Could the regime take over Syria in the same way that it did in 1982, and could Syrians become slaves again?

These are the hopes of the regime and its small support base, which viewed the revolution as a threat against their existence. They were encouraged by the fact that their destruction of Syria and the Syrians passed with impunity, while this would have justified the ousting of 10 regimes. Contrary to the claim that the opposition relied on outside aid, it was rather the regime and its supporters who turned out to be more reliant on outside help.

It was not only allies like Iran and Russia that supported the regime, hostile countries also joined in. This is why we do not see pro-resistance media on occasions such as visits from Western parliamentary delegations or foreign media and statements from Western politicians on the possibility of rehabilitating the regime and restoring its legitimacy or its desirability as a lesser evil in the face of terrorism.

No one seems to care about the people of Syria enough to ask if they would accept a return to a regime of slavery. It seems that they have the least say in determining their own fate and that of their country's. However, they have changed a lot over the course of the revolution and the war, something that will prevent the repetition of the 1982 experience. Maybe the most important change was that they realized their silence in the face of the disaster of Hama did not protect them from a similar fate. Syrians may not all know what could be done in such horrible circumstances, but they definitely know what should not be done, which is to accept slavery again.