After an Israeli attack against an Iranian weapons shipment to Hezbollah in Syria, the writing is on the wall that Assad no longer commands respect anywhere as Russia and Iran try in vain to prop up a discredited regime 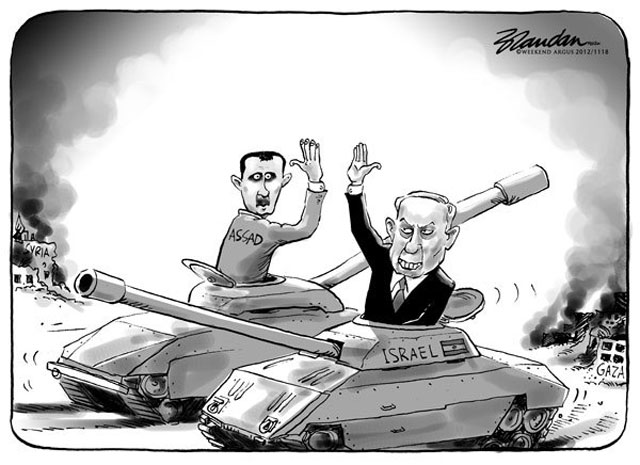 Russian media unabashedly announced that Israeli warplanes were not in any danger from Syrian regime defenses as they carried out an attack on a weapons shipment to Hezbollah through Syria. In other words, Russian media highlighted the weakness of its own air defense, currently used by the regime and supposedly meant to protect against Israeli warplanes, because, except for Israel, there is no existing declared state of aggression between Syria and its neighboring states, including NATO member Turkey, whose capabilities rival its Israeli counterpart.

Following the attack, the Israeli defense minister announced that it had no animosity toward Syrian President Bashar al-Assad, but that its objective was to block Iran’s aid to Hezbollah. This statement carried a deep underlying message — that Bashar al-Assad was weak and that Syria did not figure in Israeli calculations except as a country within Iran’s sphere of influence.

Israel is no longer content with the fact that the so-called road to Jerusalem is paved with Syrian lives — Israel now seeks guarantees against Iran’s weapons trafficking via Syria. Israel’s emboldened insistence on changing the rules of the game and establishing new public rules stems from the current Syrian conflict. Iran will not be able to secure the survival of Bashar on its terms. If the Iranian alliance wishes to be a neigbor to Israel, it must give up the illusion that Syria is a solid base of deterrence after expending its forces in the war against the Syrian people.

This will probably apply to Moscow as well. If the latter wants to bolster its presence in the region, beginning with Syria, it needs to take into consideration Israel’s conventional and newly acquired interests, even if that is to happen at the expense of its Iranian ally or even at its own expense.

While Moscow was able to neutralize Turkey at the beginning of its direct intervention, it has also instead been forced into a reluctant understanding with Israel. Israeli Prime Minister Benjamin Netanyahu was the first visitor to the Kremlin after the Russian intervention. Between Turkey and Israel, Moscow is well aware that the latter is capable of undermining its overall progress in the region. Russia is also wary of the fact that Israel is in a position that can undermine Assad’s regime, an event that can pose a serious threat to Russia’s hegemony, something that the Syrian armed opposition groups have failed to do.

The time for making fun of “maintaining the right to respond” after every Israeli aggression has come to an end. The only remaining progress would be to grant the right for Israeli warplanes to fly over Syrian territory without intrusions or ridiculous sovereignty claims. The time has also ended for the regime’s secret messages to Israel about the importance of the Syrian regime for Israeli border security. The regime is no longer in a position to guarantee anything.

Assad’s problem today is not summed up as giving in to Israeli demands. In order to remain in power, Assad is desperate to do anything. The problem lies in Assad’s fantasy of retaining the regime as a viable option for all concerned parties active in Syria and his fantasy of being able to exploit the difference of these parties to his advantage.

This imaginative strand of foreign policy, originally associated with his father Hafez al-Assad, clashes with the logic of total dependence on Tehran and Moscow. Assad’s dependence on his protectors makes them decision-makers, and his regime, in return, has nothing to offer but total obedience and occasionally serving as a postage box between them.

It is certainly a historical anomaly to find a regime providing every imaginable service to foreign powers just to avoid giving any concessions domestically. The anomaly is not just in dependence on foreign powers, but also in the number of such dependencies as borne out by the title of the famous Italian comedy play “Servant of Two Masters” by Carlo Goldoni. However, the situation has advanced beyond this title, as the position of the regime has lured more than “two masters” to demand its services, while this same position does not allow the regime to serve everyone without prior agreement.

The irony will increase if we note that the regime’s thugs are torturing prisoners to force them to acknowledge that Assad is their god. It is no wonder that Assad thugs have become notorious for asking the question: “Who is your lord and god?” In the figurative sense, perhaps this is also what the Israeli warplanes ask.