Donald Trump's decision to strike the Shayrat base earlier this month was less about changing the balance of power in Syria, but instead represented a nod to his domestic rivals showing his willingness to act as a strong and decisive leader, Abdel Moneim Ali Eissa writes for loyalist outlet Al-Watan 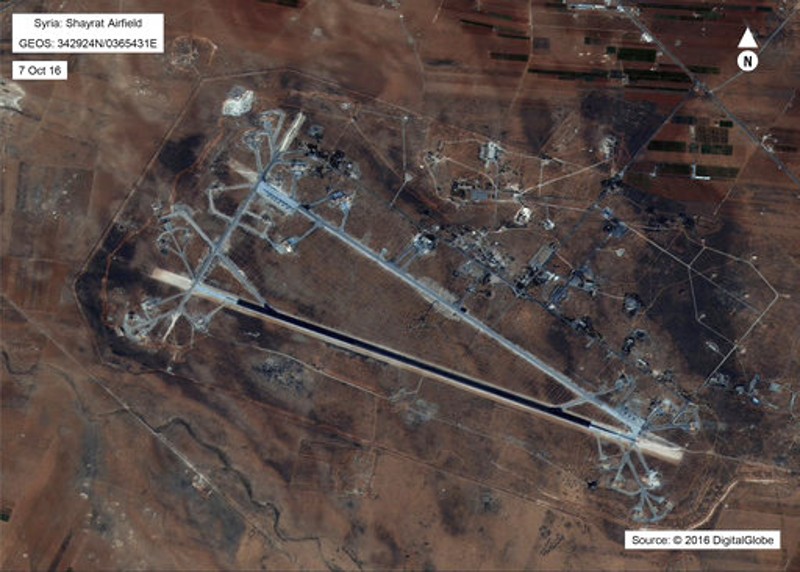 On April 7, U.S. President Donald Trump entered into the battle to build his legacy as a strong president after eight years of American “prudence” which characterized the two terms of Barack Obama. Trump wants to eliminate this prudence from Washington and the accusations that have been drowning him, which have made him out to be Russia’s man in America. Confirmation of this theory comes in the U.S. Congress' decision to provide Trump with a mandate to supply the Syrian opposition with MANPAD anti-aircraft missiles on April 9, that is, 48 hours after the decision to strike the Shayrat air base.

In terms of the strike’s consequences, it does not seem that Trump has has produced new positions or methods, and so the war camp against Damascus remains as it is, unchanged. However, two important points must be noted in this context. First: the volume of the weakness and hesitation of the “world” in calling for a settlement to the Syrian crisis. It is as if it is not aware that positions and methods taken are what impose solutions or make them realistic. Second: what Ankara moved toward, in expressing its support for the American strike, was its constant readiness to participate in any military action which Washington may decide or determine against Damascus. This is certainly a departure from the Turkish-Russian understandings, and will cast a heavy shadow over the existing relationship between the two countries. Ankara has burnt its own ships because the time has come for the decisive battle. It is notable that Turkish President Recep Tayyip Erdogan threw aside all that he had achieved with his recent harmony with Russian President Vladimir Putin in a single moment. Perhaps this, through the image which appeared, was the biggest in a series of mistakes by the Turkish president, who seems like he might drown in an inch of water.

As for other consequences, the strike has pushed Moscow toward strengthening and supporting Syrian defense capabilities after it became clear that the S-200 anti-missile system was not effective. However, the peak consequence was Moscow's notifying Washington of its decision to suspend the memorandum between the two countries intended to avoid a direct military confrontation and ensure safety in Syrian airspace. This expresses the Russian decision to evict America militarily from Syrian territory.

The most important question remains: Was the strike on the Shayrat air base an introduction and will it be repeated? The answer most likely will be defined by two matters, the first of which is the atmosphere which the strike imposed and the Moscow's sharp reaction – which came as the British defense minister announced on April 7 that the strike did not represent the start of a military campaign by Washington against Damascus. And secondly, the “capability” scandal which the strike revealed. It is certain that Washington brought out the pride of its missile industry. However, the number of Tomahawk rockets launched from the Lebanese coast which reached their target did not exceed 23 out of 59. Perhaps it was Washington’s loss of faith in its missiles which played the most important role in choosing the target, given that the Shayrat air base did not have any Russian or Iranian presence and was not near to them. It seems that the fear of the rockets not reaching their targets precisely led to the selection of a target more than 50 kilometers from any Russian military presence. Confirming this theory is the fact that Washington notified Moscow of the strike, as the Pentagon announced, hours before it occurred, so Russia could remove any personnel. The length of this period of notification, relatively speaking, does not justify the idea that this warning came under the framework of the American-Russian agreement – especially given that what Washington offered was a departure from the lowest existing consensus, or did not take the consensus into account.

In short, the strike did not aim to change the existing balance of powers, as many have suggested, nor was it launched for long-term aims to the extent of bringing down the regime in Damascus. It was nothing more than a notice Trump wanted to give to his domestic rivals in the American ruling institutions and system, and the decision-making within them. He wanted to express his goodwill toward them or give material proof of his return to the serious path, after his three months of troublemaking as president as well as the lead-up to the presidential elections.