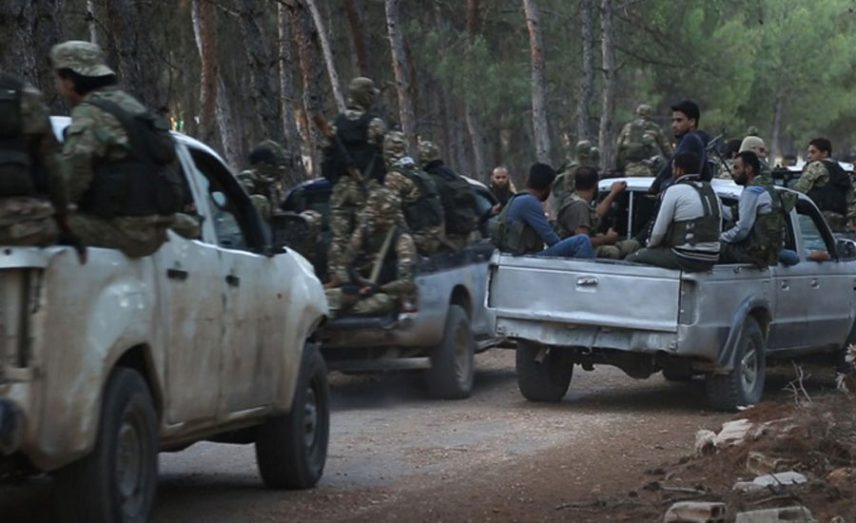 "Hey where are you going? Where? … Guys come out from the house … There are women and children who will die because of you … Shame on you, you'll kill one another!" This is what Umm Akram screamed as the Hay’at Tahrir al-Sham (HTS) and Ahrar al-Sham groups turned civilian homes into barricades and alleyways into battlefields.

Western Hama province and all of Idleb's countryside have witnessed the most violent clashes between the opposite poles of the arena in the north.

I was in Idleb when the fighting began on July 18. Out of fear that the events would develop, we decided to return to our house in the northern Hama countryside, guessing that our small village which neither of the factions had a presence in would be safe. We did not expect that we would be trapped for two days under fire, that our homes would sit in the middle of a battlefield, and that my children would spend their days crying from the terror while watching ammo rounds penetrate our house's walls, lying on the ground and unable to stand for fear of the bullets. You could not guess what side the bullets would come from in order to shelter behind a wall on the opposite side, because the bullets were coming from all directions.

Because I have covered some battles and regime bombardment in 2013, I was not afraid like other women who tried to shelter in their homes, as my husband and I are journalists and we believed that the fighters would stay away from the house! I tried to take photos with my mobile of the fighters who were using civilian homes as shields and hiding behind tree branches, but there was a window between me and them and the anti-aircraft bullets that punctured a number of walls made me lose my nerve, and my vision was weakened by high blood pressure.

This situation continued from 10 a.m. on Thursday, July 21, until 6 p.m. on the same day. Then the HTS fighters began to withdraw and Ahrar al-Sham advanced, ending the tense hours that had passed and beginning a stage of fear about new clashes with reports of the two sides gathering in nearby villages.

One of the hardest things was to bring water from the well outside the home. The distance was no more than 20 meters, but I had to cross it crawling out of fear of the bullets which did not stop buzzing in our ears. Because of the power blackout, we brought water from the well because it was a little cold, and therefore we had to renew it every hour. My son Mahmoud was braver than the other children, despite the signs of fear on his face. He kept repeating, "Mama, I'm afraid for you. Don't go get water, we'll drink hot water, it's no problem."

Hala, my 9-year old daughter, surprised me wearing a long sweater and a head cover, hiding the accessories which were on her chest. I asked her, "Why did you dress like that?" She said: "My friend in Idleb told us that every girl walking in the street without a hijab would be thrown in jail by the Nusra Front, and those are all Nusra." I told her: "That's true, but they only arrest adults and not children like you."

Jumailia, 45, spoke with us, shivering. She looked at the ground and said, "I've been displaced a number of times during the war, but our joy at returning to our house after years of moving is incomplete. When regime forces swept into the area over the past years, they did not storm our village because it was so small. But the rebel groups did not spare it, instead they turned it into a battlefield for two days.

"The fear which we felt was much greater than the fear of the last two years. It's something unbelievable to be among bullets and to come out safe. I did not expect to go to a neighbor's house crawling, and I did not imagine that I would have the strength to crawl 500 meters! You cannot imagine my state, the tears dried from so much crying, and the nerves raw, and no longer any strength to carry my exhausted body. The cries of the women who were moving from house to house in the same neighborhood, fleeing from death, will not leave my mind.

"Neither will seeing your house turned into a protective cover for Tahrir al-Sham fighters to hide behind, full of fighters who are firing in all directions. And then Tahrir al-Sham targets them with anti-aircraft weapons and [the house's] stones fly through the air! When you feel life has stopped and that you are in the past, and a strip of memories begins, you are led to ask why Syrians have suffered so greatly!"

She continued, with a clear lump in her throat: "I tried at that time to conjure up the beautiful things which had happened in my life, to conquer the massive pain, but I could not remember anything."