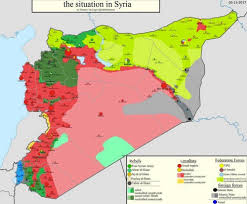 The battle to retake Idleb has begun with a great deal of preparation, deliberation and precise planning. The province is subject exceptional circumstances in light of the developments which Syria has undergone for more than seven years; with the transfer of thousands of terrorists from hateful groups as a result of the first failed attempt to make the Jisr al-Shoghour area into a trap like the one laid by the hostile powers and NATO forces in the Libyan city of Benghazi during the Western aggression against the Jamahiriya. The plotters had tried to make this area a no-fly zone, under the pretext of protecting civilians, so as to bring in heavy weapons and missiles for the militants who would proceed to declare an Islamic emirate enjoying the recognition of Western colonial powers after obtaining a resolution from the Security Council similar to Libya. However the conspiracy failed spectacularly. The steadfastness of our brave army was a lesson in tenacity and perseverance and recorded the finest episodes of heroism and sacrifice.

Today the world’s eyes are turned to Idleb, which part of the de-escalation zone agreement. The General Command of the Army and Armed Forces has announced the continuation of settlements and reconciliations for groups that surrender and turn in their weapons to the government in accordance with what has been done in other areas. Meanwhile it has headed north to confront the terrorists from the Al-Nusra organization, which needs to be fought according to the outcomes of Astana. The Army is advancing after dropping leaflets calling for reconciliations and settlements to avoid military confrontations. However the Turkish presence has prevented a compromise from being reached, despite the Turkish being one of the guarantors of the Astana agreement, because Ankara has close ties with the terrorist groups. It is trying to apply pressure under the pretext of the presence of the Kurdistan Workers’ Party, which Ankara has declared to be terrorists, unlike the rest of the international community which only acknoweldges the Islamic State and Al-Nusra Front as armed terrorists in Syria.

As complex as the situation in Idleb appears to be, it is heading toward a solution either through the military route or through settlements. The Syrian Arab Army has begun its plan and will not stop at any hurdle until it reaches the political border with Turkey. Idleb will not remain within the power of aggressive Western forces that continue to perpetuate lies about the protection of civilians, through the deception of Mr. Staffan de Mistura, who is trying to put pressure on the issues of the constitution and the delivery of humanitarian aid. This is only after putting forward terrorists as alleged opposition representatives in the so-called High Negotiations Committee, the political face of the terrorist gangs. Today, Idleb is in a state of confusion and loss after the Qatari-Gulf division which revealed the Gulf’s dirty intervention and the money it employed in the service of terrorist projects against Syria.

Idleb could be a knot in the field of political negotiations sooner or later. However the military measures that will clarify the field will be the established truth that will silence tongues and shut the mouths of those who participate in the shedding of Syrian blood, which has incited strife and supported terrorism. There will not be long to wait before the Idleb knot is cleared and then Raqqa and the eastern Euphrates will be the next destinations to be cleansed and purged of the remaining terrorists.