Following the assassination of Abdallah al-Oss, the regime has arrested a number of men and women, who were questioned about the incident reports Sowt Al-Asima. 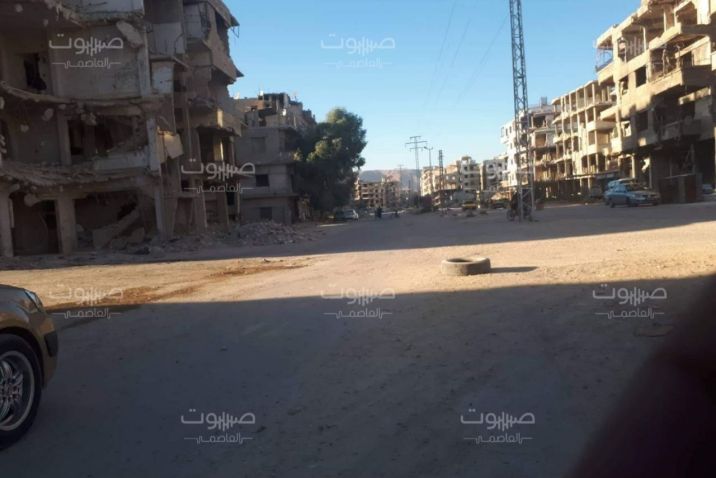 During the past two days, the regime’s intelligence services carried out a raid campaign targeting a number of homes in the city of Harasta in Eastern Ghouta, during which they arrested a number of the city’s residents.

Sowt Al-Asima’s correspondent said that patrols belonging to the Political Security Branch, and others belonging to the Fourth Division, raided a number of homes in the al-Bustan neighborhood in Harasta, following the assassination of the leader of the regime militia, Abdallah al-Oss, a few days ago.

The sources added that the raid targeted some industrial workshops as well as homes surrounding the area where Oss was assassinated, confirming that they also arrested a number of people, including women.

According to the sources, the regime intelligence released the women on the same day, after they were subjected to questioning about the assassination, while the men and younger males were kept in detention until Wednesday.

Last Friday, Oss was killed in the al-Bustan neighborhood of Harasta. His car was targeted by an explosive device, which led to him losing both feet. He was transferred to a hospital in the capital, where he died.

Oss worked as an informant for the regime’s intelligence during the peaceful protests in his city, before moving to armed action with the Syrian regime, by establishing a militia called The Assad Cubs that included a number of people from Eastern Ghouta. He participated in military operations that the regime carried out in Hama, Homs, and rural Damascus, the last of which was in Harasta, before the agreement to displace opposition factions to northern Syria.

Locals suggested that influential people affiliated with the regime were behind the assassination, based on the great disagreements Oss had with other militia leaders, who knew that he was trying to expand his control in the city and attract the largest number of young people to the ranks of the militia that he was working to form, under the name of the National Defense, and which is affiliated with the Tiger Forces militia, led by Brig. Gen. Suheil al-Hassan.