Recent meetings held by Russia have caused concern with the regime, which has threatened Syrians involved with the process reports Al-Modon. 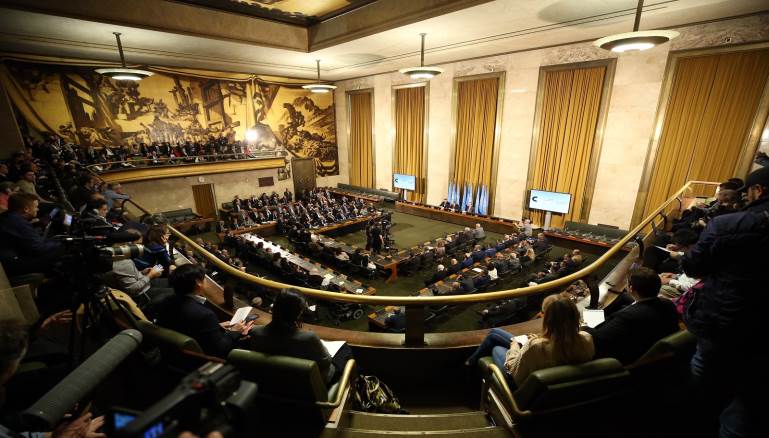 The Syrian regime is deeply concerned with regards to the respective meetings that Russia is holding with opposition and neutral Syrian bodies and figures, in particular the Jun. 15, 2020, meeting that gathered figures from the Alawite community who reside outside of Syria at the Russian Mission to the United Nations in Geneva.

Furthermore, the facilitator of the meeting—which was conducted via encrypted electronic technology—the Humanitarian Dialogue Center leaked some details of what was discussed during the confidential session. A Syrian lawyer revealed that he had received death threats, due to his participation in the meeting.

Civil Work Movement Advisor, attorney Issa Ibrahim, told Al-Modon, that direct assassination threats were communicated to him from Damascus, due to what the regime considered “crossing a red line”. Ibrahim attributed the regime’s anger to the fact that, “the meeting broke the monopoly of the representation of the Alawite sect in Syria by the regime.”

Moreover, Ibrahim explained that the invitation to meet with the first secretary of the Russian permanent diplomatic mission to the United Nations in Geneva, Sergey Mitushin, was a Russian initiative, expressing his surprise at the regime’s exasperation at the meeting with the Russians, knowing that they are among their strongest allies. Ibrahim also pointed out that a number of loyalists blamed Russia for inviting opposition figures, stressing that one of the loyalists said, “Those who claim to represent the sect are not to blame, but it is rather Russia which met with them.”

On the agenda of the meeting, Ibrahim said that Russian officials said they were going to talk to all Syrian parties, to know more about the diverse views, stressing that, “the Russian proposal focuses on the idea of a central state, along with details of perceptions of the solution in Syria and the shape of that solution and the national conference.”

Ibrahim further indicated that the Russian side was greatly dissatisfied with the general feeling that seems to overwhelm the Alawite community, which is that all that matters to the Russians is the protection of Assad and his regime, away from the interests of Syria as a state. He also said that, “the [Alawite] sect is now actually languishing under the influence of a repressive intelligence regime,” adding that, “the Alawites do not consider the regime related to them, because the system has a diverse nature and that diversity does not make it secular or benign, for it is actually a corrupt system that uses sectarian, partisan and regional intolerance/fanaticism in order to achieve its political ends and to stay in power. That being said, it is not permissible to marry sectarianism and the regime.”

Ibrahim continued that they attended the meeting with the Russian side as Syrians first with their Alawite sub-identity being respected and political diversity among the members of the delegation, which reflects “the diversity of the sect from a political perspective.”

In the same context, journalist Bassam al-Youssef, an Alawite himself, said that the meetings that Russia is conducting with Syrian opposition parties, whether with Alawite or non-Alawite figures (such as Moaz al-Khatib), are paving the way for a national meeting on a broader level, to solve the intractable political situation facing Russia in Syria.

According to Youssef, Russia has an urgent need to resolve the complex situation in Syria, because staying in the Syrian quagmire conflicts with Russian interests, especially as Moscow is starting to fear the repercussions of the Caesar Act.