The Syrian regime is pressuring powerful cronies, including Samer Foz and Mohammad Hamsho to force them to pay millions of dollars, Brocar Press writes 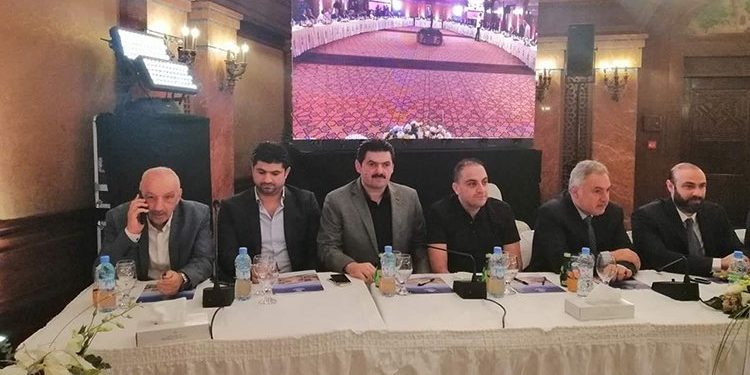 The finance and business sector of the Syrian regime held a meeting on Saturday in the Sheraton hotel in Damascus, attended by Syrian regime businessmen, including those who were said to have fled outside the country. Details of the meeting were absent from the media, except for reports that Samer Foz has “donated” 10 million dollars to support the Syrian lira.

The meeting was attended by Mohamed Hamsho and the Qaterji brothers, whom local news reports had said had fled a few weeks ago. The head of the Federation of Chambers of Industry, Fares al-Shihabi, was absent. The head of the Chamber of Commerce for Damascus and its countryside, Samer al-Dibs, was also absent from the meeting which was called for by the Damascus Chambers of Commerce and Industry with the aim of “supporting the lira in coordination with the Central Bank.”

The local Shara’ al-Mal (Money Street) website said that a report had leaked of Foz depositing 10 million dollars to clean the businessmen’s page after it had been polluted recently with reported corruption cases.

While the meeting was held without the media, local loyalist pages and Arabic and local media circulated reports of a “palace campaign” to confiscate the funds of prominent businessmen (war profiteers) as forced quotas.

The Al-Modon website reported a week ago that the Republican Palace had issued a decision to prevent the Qaterji brothers from leaving Syria and gave them a deadline of 30 days to pay their financial dues.

At the same time, local loyalist pages reported that Asmaa al-Assad (the regime head’s wife) was leading the palace campaign and overseeing it—with Russian backing—with decisions made to curb the influence of Hamsho, the Qaterjis, and others.

It seems that news of the Sheraton meeting opens a wide door for predictions and forecasts, mostly explained, according to what Brocar Press has observed, as being a financial settlement between the regime and war profiteers whom the regime has empowered in recent years—and this is the reason Foz paid this amount.