The residents of the al-Rukban camp have been enduring a bitter siege and have suffered from the lack of food and medical supplies writes Asharq Al-Awsat. 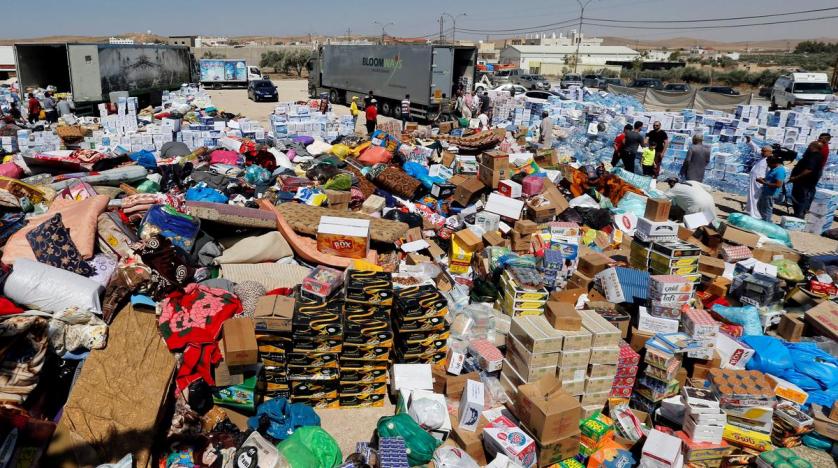 The population of Rukban camp in a US-protected desert zone in southeast Syria has dwindled to a quarter of the more than 40,000 who lived there five months ago due to Russian moves to block supplies, Syrian aid workers, diplomats and residents said.

The fate of the camp and its residents, living near a Pentagon-run base close to the Jordanian and Iraqi borders, highlights the tussle for influence in the region between Russia and the United States.

The camps inhabitants, most of whom fled from Russian air strikes when Moscow pounded towns in eastern Homs desert several years ago, say growing hunger and poverty as a result of the blocking of food supplies had forced most to leave, Reuters reported.

“The situation is very, very bad and food supplies are not available,” said Mahmoud al Humeili, a prominent local figure in the camp who fled Homs.

Moscow says Washington is providing a safe haven for opposition in the 55-km deconfliction zone set up by the Pentagon that is off limits to Syrian or other forces.

Russian and Syrian forces have laid siege to the area, preventing smugglers and traders who once bribed their way across checkpoints to deliver essential food to the camp.

Russia set up “humanitarian corridors”, which it says will allow people to return home. The men living in the camp say if they leave, they face conscription to the military or worse.

“Thousands of internally displaced persons have now fled Rukban out of desperation, taking the risk of arrest by regime forces,” reported Etana, a leading Syrian policy research group based in Amman that gathers information from civil and military sources.

According to Reuters, the group estimated that, as of July 23, there were about 11,000 people in the camp, compared to a UN estimate of 41,000 in February.

Washington wants to maintain a strategic foothold in an area close to a crucial supply route for Iranian weapons entering Syria from Iraq. Iranian backed militias are entrenched in the vast desert area around the zone, according to regional intelligence sources.

“Conditions are currently the worst in the history of the camp with the Syrian regime and its Russian ally continuing to implement a starve or surrender strategy to force the camp’s occupants to leave,” Etana said.

“If we feed them, it will look like we are going to stay there forever,” James Jeffrey, the US special representative for Syria, told the Washington Post on July 19.

“We can’t commit to a long-term presence in al-Tanf or in anyplace else in Syria.”

Residents say at least 6,000 to 7,000 will remain because they face an uncertain future at the hands of the Syrian authorities if they returned home to government-controlled areas.

“We will stay until the last breath because we fear what awaits us if we return to the regime,” said Shukri Shehab, a local camp official.

Many of those remaining would prefer to be evacuated to the last remaining opposition enclave in northwestern Syria, Reuters reported.

UN humanitarian agency OCHA, which has avoided saying who was responsible for the worsening humanitarian plight of the camp residents, said food had already become a scarce, leading to high prices.

It said it was seeking approval from Damascus to send relief for those still in the camp.