Iranian militias and Hezbollah have been transferred north, from the south, to bolster the fronts for an expected upsurge in the violence reports Etihad Press. 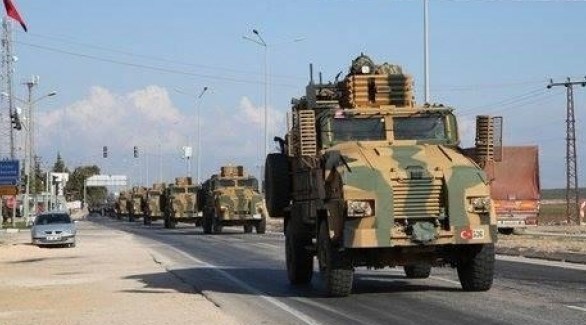 Convoys including weapons-mounted vehicles and members of the Lebanese Hezbollah militia as well as Iranian militias have arrived from southern Syria to the fronts around Aleppo province.

According to activists, the mobilization of these militias comes amid expectations that major developments will occur on the northwestern fronts between the regime army and Turkish units.

The reinforcement of the regime army with troops, weapons and equipment is being met with major reinforcements sent by the Turkish army since Sunday to the areas it controls in northern Syria.

The Turkish convoys include dozens of armored vehicles and military equipment as well as logistical material, heading to the Turkish observation points in Idleb, Hama and Aleppo, with reinforcements entering through Bab al-Hawa and the Kafr Losin crossing.

According to leaks attributed to the opposition, the Turkish units and al-Nusra Front are planning for a total war against regime forces by igniting (safe) fronts not expected by the Russians and the regime, and that the fighting will spread from Idleb and the northern Hama countryside to areas controlled by the regime, with continuous Turkish support.

According to the leaks, the units have received orders to be ready to begin a parallel military campaign launched by al-Nusra against the regime army in the northern and western Hama countryside with the aim of retrieving villages and towns the army has entered.

This strategy will start in the coming days to retake safe areas controlled by regime forces before Putin and Erdogan meet, to put pressure on Moscow, if it will not stop military operations in Idleb and Hama.

But the proceedings of events on the ground indicates that the military conflict in northwestern Syria could turn into a long war of attrition that will not stop without Turkish-Russian agreement or international intervention.