The "Double Tap" strikes, hitting the same target twice, has been a common tactic of the regime and Russia, which aims to increase causalities reports Enab Baladi. 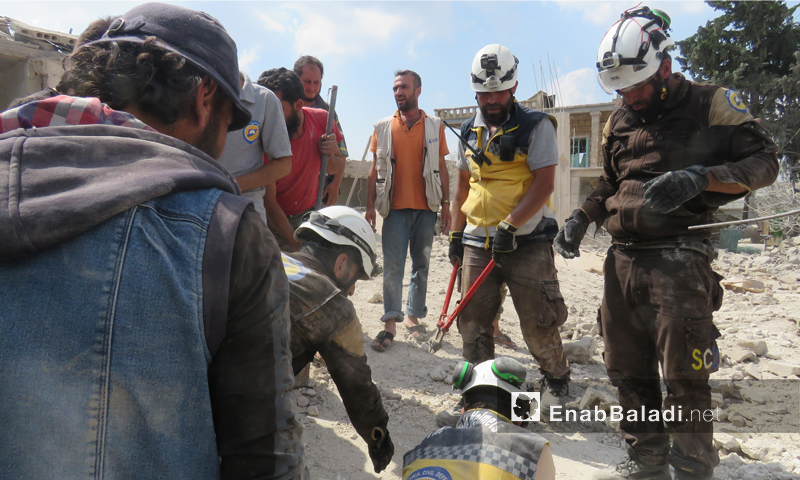 Two member of the Civil Defense were killed and others were wounded during an airstrike that hit the team in the city of Khan Sheikhoun in the Idleb countryside.

On Wednesday, Enab Baladi’s correspondent in Idleb said that Russian warplanes had struck a Civil Defense team with a double tap strike while they were trying to rescue the wounded, killing two members and wounded three others.

The Syrian Civil Defense was established through different groups of young men at the end of 2012 and beginning of 2013.

The group includes Syrian volunteers from various classes, whose mission is to look for civilians trapped under the rubble during the Syrian regime’s attacks on residential areas with rockets and airstrikes, and then to rescue and treat them.

The Civil Defense members and centers have turned into a direct target for regime and Russian airstrikes in recent years as they pursue a policy of double tap strikes, according to the Syrian Network for Human Rights in May 2016.

The policy involves bombing an area, before returning to bomb the same area minutes later to inflict the greatest possible losses among the Civil Defense.

The reason the “White Helmets” have been a constant target of strikes by Assad’s forces and Russian warplanes is because they are witnesses of the various forms of bombardment that have targeted civilians, according to the Human Rights Watch in July 2018.

The group said, “pulling the injured from under rubble, burying the dead, putting out fires, and conducting countless search and rescue operations. They bore witness to many of the atrocities that characterized the conflict.”

This coincides with the continuing bombardment by regime and Russian warplanes on various parts of Idleb and Hama.

The correspondent said that one person was killed and a number of civilians were wounded, as a result of airstrikes with vacuum bombs on the environs of Maarat al-Nouman in the southern Idleb countryside.