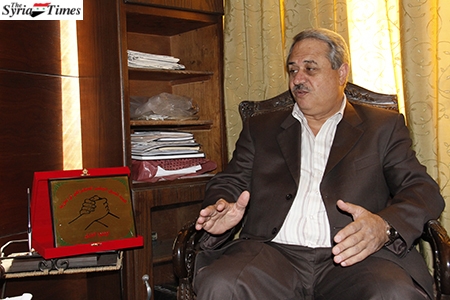 What is your Commission's stance on the Russian military support for Syria?

We support the Russian airstrikes against terrorism and the terrorist groups of ISIS, Nusra Front and others. These airstrikes are very useful to root out terrorism. What Russia did, at the official request of Syria, in one month is more than what the United States–led coalition did in more than a year.

Russia also has good political ties with the Syrian government and national opposition groups. For that reason, Russia could gather the government and oppositions for the Moscow 1 and Moscow 2 meetings. Our Commission participated in both meetings and we reached good results in both of them.

Syrian President Bashar al-Assad made a successful visit to Moscow and met with Russian President Vladimir Putin. Both leaders discussed means of activating military and political cooperation, which will pave the way for a political solution to put an end to the crisis in Syria.

How do you see the political solution for the crisis in Syria?

We believe that President Assad is a national necessity and is very important to make success of the political solution for the crisis in Syria.

We consider the Syrian Arab Army as the national army, which contains all Syrians in its units and we support the Army in its war against terrorism.

We believe in the process of dialogue to end the ongoing crisis in Syria by holding a national conference which includes all sides, the government, internal opposition and external opposition, which believe in the political means and are not engaged in any terrorist activities. The conference should be held with international guarantees for external opposition figures to attend the conference in Damascus and to discuss all issues and topics regarding the crisis in Syria. The conference participants will form a national government, which will prepare the country for parliamentary elections, and solve the issues of detainees, the missing and kidnapped, in addition to Syria’s displaced – inside and outside the country –and their return to their homes.

How do you distinguish between internal and external oppositions?

The Syrian internal national opposition groups have a long, honest history and legitimate demands. They have no dubious link with any external sides and foreign agendas. They live inside the country and suffer as other Syrian citizens of mortars and war in Syria.

The internal opposition stands against any foreign intervention in the Syrian issues and believe in the unity of Syrian land and people.

We believe that Syria is for all Syrians, regardless their ethnic or religious background, and that Syrians should be in control of the Syrian solution only.

The external opposition groups are led by Arab Gulf states, regional and international sides and call for foreign military intervention in Syria. Some of these groups implement agendas and plots to divide Syria and some of these groups called to implement the Turkish lira instead of the Syrian pound.

The external opposition is mainly made by foreign intelligence departments to implement their agendas in the Syrian arena.

Can you give our readers a brief idea about your Syrian National Democratic Action Commission?

Different national opposition groups, forces and figures announced the formation of the National Democratic Action Commission on 12 May 2014. The announcement was made in a public press conference, held in a hotel in downtown Damascus. The press conference was attended by nine ambassadors and different local and foreign mass media organizations.

Our Commission calls for the amendment of the Law of Parties. I graduated from the Faculty of Law at Damascus University. Since 1993, I have been a lawyer and opposition figure and believe in the principles of pan-Arabist Nasserism.

I have also made visits to China, Iran, Russia, Sweden, Spain, Egypt and other states to participate in political meetings and gatherings.